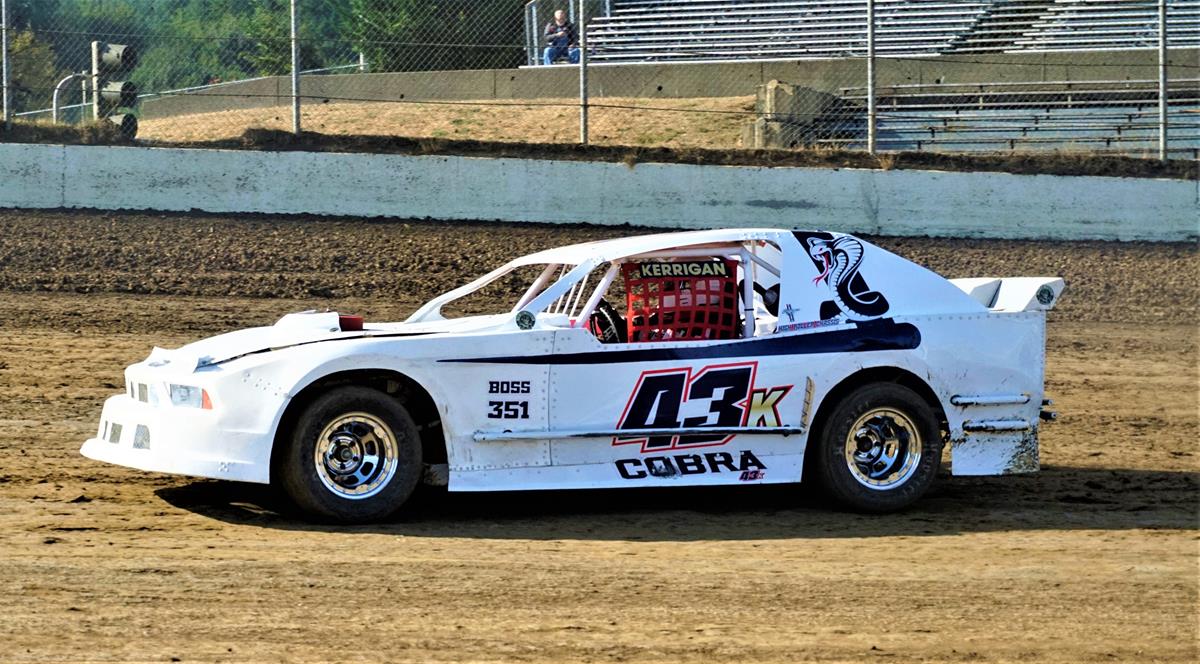 The 360 Sprint Cars, IMCA Modifieds, and Super Stocks were back in action. Also, the Northwest Focus Midget Series, and PHRA Dwarf Cars made a return after last weekend's two-day event.

Mollala, Ore driver Henry Corbin II led the field to the green flag in the 15-lap feature. Corey Esteban of Gaston, Ore wasted no time getting to the lead, bringing Hillsboro, Ore's Mike Shoen with him. Henry Corbin III of Mollala, Ore worked his way into third, as Justin DeMars of Sandy, Ore sat in the fourth position. Esteban quickly pulled the lead to over a straightaway late in the feature event and held on and picked up the caution free event over Shoen, Corbin III, DeMars, and Jim Pavel of Mollala, Ore. Heat race winner was Shoen.

14 cars signed in for the event. The 25-lap feature saw Nick Evans of Granite Falls and Renton's Chris Foster set the front row. Evans took the early lead but the caution flag flew for Levi Harless of Arlington, slowing in turn two. On the restart, Evans led the field with Jesse Munn of Granite Falls in second. Foster battled Elma's Garrett Thomas and Shane Smith of Sedro Woolley for third. Thomas and Smith moved by Foster, as Foster battled back getting by Smith. Kyle Hanson of Burlington joined in on the battle looking for a top five position. Harless, who brought out an early caution worked his way into the battle. Evans put some slight distance on himself and Munn, but the caution flag flew on lap 7 for Tukwila driver Joe Shawley, slowing on the front stretch. On the restart, just as the green flag flew, a melee occurred with multiple cars, sending Hanson for a wild ride on the front stretch. Hanson exited the car and was ok. Evans had tough company on the restart as Thomas moved into second, Sedro Woolley's Jeff Westergard moved into third, looking to track down Evans and Thomas. Evans worked his way through lap traffic, as did Thomas, looking to track down and take the lead. Westergard continued at a distant third. It was all Evans, picking up the win over Thomas, Westergard, Harless and Graham's Bert Johnson rounding out the top five. Heat race winners earlier in the evening were Evans and Munn.

Jeff Dunlap of Kent led the field to the green flag, it was Shelton's Jay Cole taking the early lead, but the caution flag flew for Olympia driver Eric Rockl, spinning in turn four, collecting TJ Richman of Deer Island, Ore. The restart saw Dunlap get the jump on Cole going into turn one, Cole made the pass on the outside to take the lead. Monroe's Kiera Zylstra ran in the third spot, as Graham's Jordi Meese look to make a pass for a podium position. Zylstra held on and slightly pulled away. Cole put some distance on Dunlap, as lap traffic became a factor, Cole worked his way through, with Dunlap gaining. Dunlap looked low off of turn four, but couldn't make the pass. Lap 13 saw Dunlap spin in turn one, doing a complete 360 and continuing on, just as that happened Zylstra spun in turn four bringing out the caution. On the restart it was Cole, Dunlap, and Meese. Lapped cars were placed between a few drivers, giving Cole an advantage. Cole continued to extend his lead on a long green flag run and picked up the win over Meese, Dunlap, Zylstra, and Chris Green of Spanaway. Meese won the heat race early in the evening with Dunlap picking up fast time.

A pair of Spanaway drivers set the front row of the 25-lap feature, as Tim Phillips led Zach Fuller to the green flag. Fuller took the early lead, with Phillips looking to track him down. Shelton's Scott Miller worked his way quickly into the top three, looking to track down Phillips for second. Miller worked his way into the runner up spot on lap 2, getting by Phillips. Fuller had tough company as Miller looked to make a pass on the middle of turn one. Fuller ran the top side of the 3/8's banked clay oval, putting some distance on Miller. Hoquiam's Jason Tole looked to move into the third spot, but couldn't make the pass. Miller made a pass on lap 6 for the lead on Fuller. A three-car battle for third between Phillips, Tole, and Tumwater's Tyson Blood was one of the battles to watch. Lap 7 saw Hoquiam's Elliott French slow in turn four. On the restart it was Miller, Fuller, Phillips, and Blood. Fuller saw tough company as Blood moved into third and wasting no time to battle for second. Lap 9 saw the caution flag fly after Phillps and Tole made contact on the front stretch, Oakville's Brian Harding made contact with Phillips, sending him to the infield. On the restart Fuller look to make a pass for the lead, but saw a pair of drivers on his back bumper. A three-car battle for second between Fuller, Blood, and Shelton's Brenton Schnitzer was the race to watch. Blood worked his way into second, bringing Schnitzer to third, shuffling Fuller back to fourth. Seabeck's Craig Moore looked to make a pass out of turn two, setting his sights on the top three. Lap 20 saw a battle for the lead between Miller and Blood, as lap traffic loomed ahead, Blood looked to the low side to take the lead, both drivers raced side by side, with Blood taking the lead momentarily. Miller fought back on the high side, and both drivers switched lanes out of turn two, with Miller taking the top spot back at the white flag. Blood looked low to make one last shot, but it was Miller picking up the victory, in a hard-fought battle. Blood, Moore, Schnitzer, and Fuller rounded out the top five. Heat race winners earlier in the evening were Phillips, Fuller, and Miller. 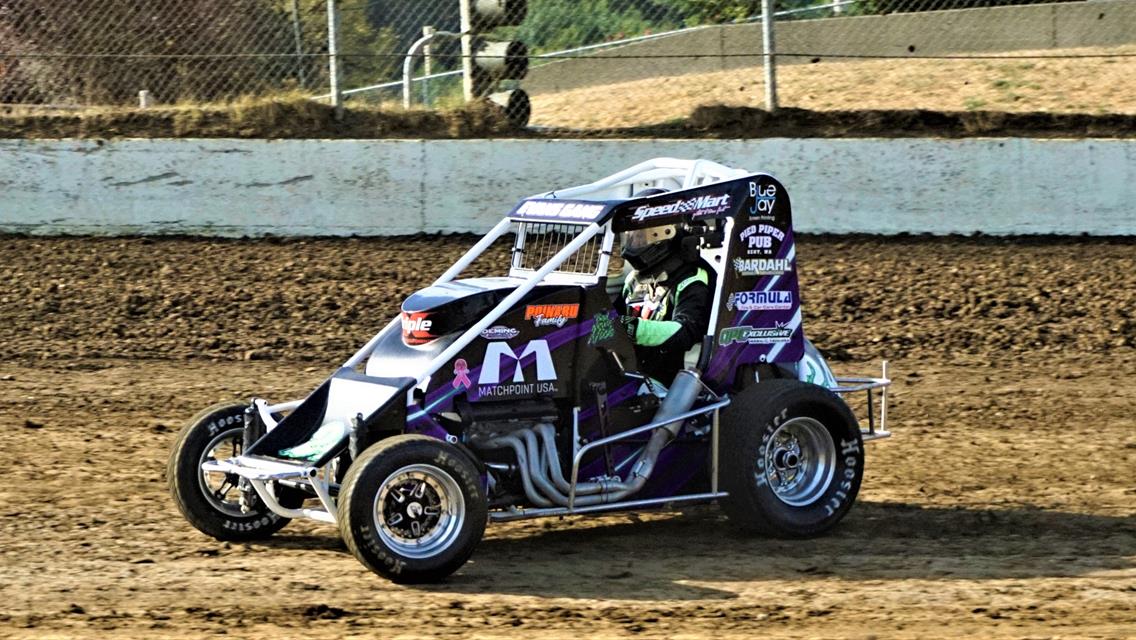 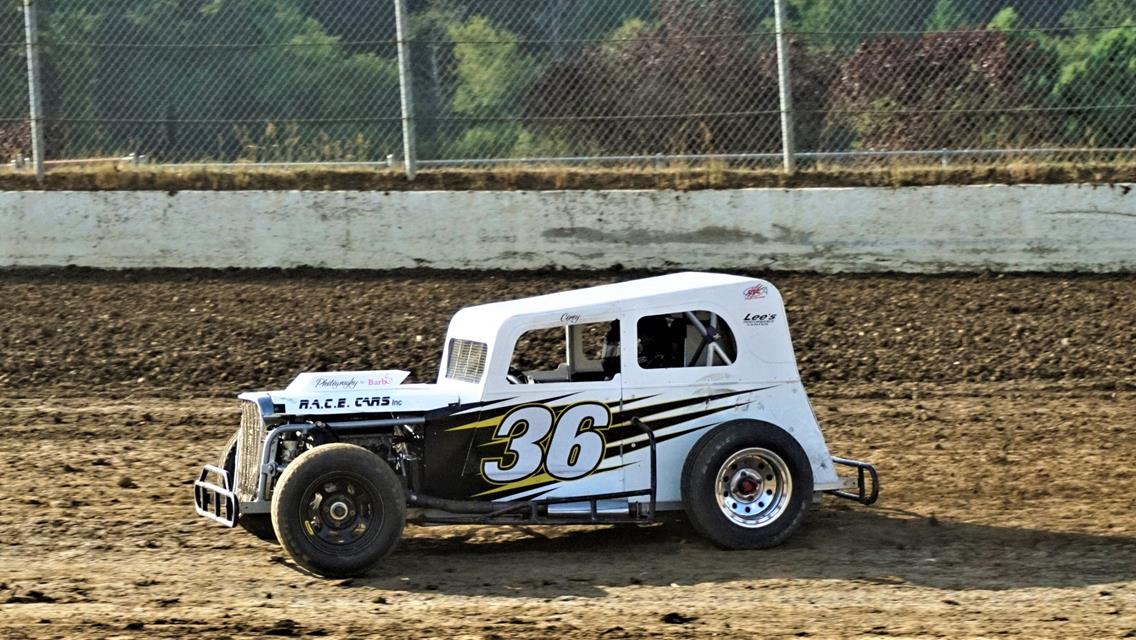