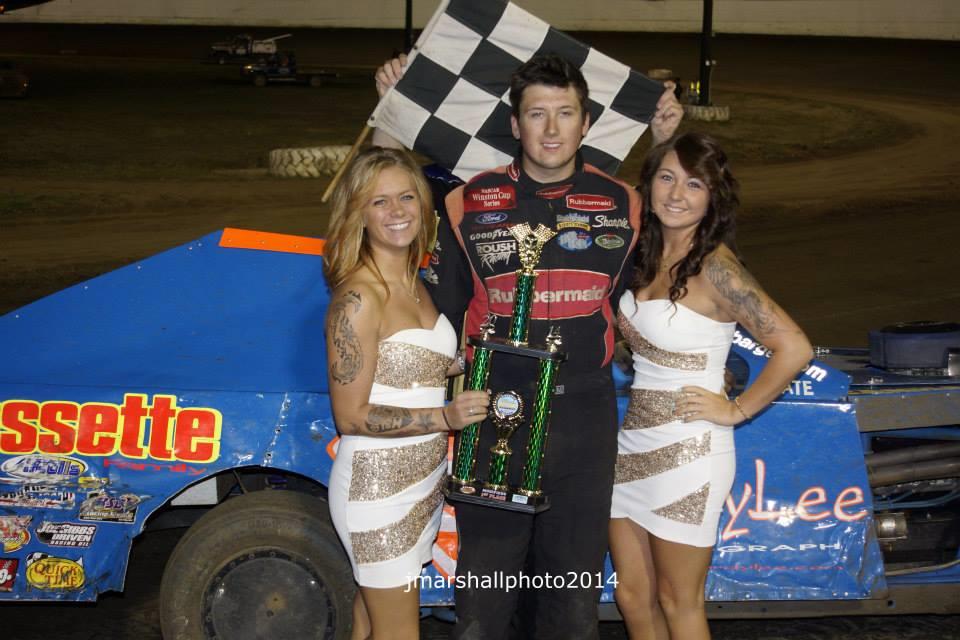 The Shipwreck Beads Modifieds were on tap with a loaded 25 lap feature. 24 cars signed in at the back gate, and all 24 would start the feature. Seabeck's Craig Moore would start on the front row with Chris Quinn of Vancouver. As the field took the green flag, Moore would jump to the early lead with Quinn, and Vancouver's Kenny Miller right on his back bumper. As the field would race side by side, Quinn would look to the inside of Moore to try and take the lead, but Moore would have the advantage. The first yellow of the evening would come out for Shelton driver Del Schnitzer as he would come to a stop on the backstretch on lap 2. Moore would lead the field down with Quinn, Kenny Miller, Portland, Oregon driver Collen Winebarger, and Lawrence O'Connor of Port Hardy, British Columbia. Moore would lead, but the field behind him would get right to his back bumper, as anyone in the top five could take the lead at any moment. Kenny Miller would look to the outside of Moore to try and take the lead, as he would race side by side, Miller would get the lead a lap later, but another yellow flag would come out this time for Matt Arnold of Elma, as he would come to a stop in turn 1 on lap 4.

Kenny Miller would lead them down on the restart, and O'Connor would jump to the lead with a pass on the outside. Miller would have his hands full with Winebarger, and Craig Moore, as Miller would race Winebarger side by side for a handful of laps until Winebarger would take over the second spot. Another battle to watch would be between Mel Decker of Mt. Vernon, and Kelso's Carl Larson, as they would race side by side for a handful of laps for position. The yellow flag once again would come out as James Wolfard would stop on the front stretch on lap 7. This time O'Connor would lead the field down on the restart, and continue to lead into turn one. Winebarger would be right on his back bumper, with Kenny Miller on the outside, and Quinn breathing down the neck of Miller. A three wide battle between O'Connor, Winebarger and Miller would bring the fans to their feet as the three drivers raced down the backstretch. Miller would take the lead, as WInebarger would get around O'Connor for the second spot and set his sights on Miller. Craig Moore would get around Quinn for the fourth position. Miller would pull away slightly but it wouldn't take long for Winebarger to catch him and make the pass for the lead into turn one as Miller would go way high into the corner, and Winebarger would drive the lower side of the speedway and take the lead.

Miller would look to the outside of Winebarger a few times, but Winebarger would pull away slightly. The yellow flag would come out once again this time for Bill Rowe of Raymond as he would slow to a stop in turn two. Winebarger would lead the field down with Kenny Miller, O'Connor, Craig Moore, and McCleary's Josh Muller who would work his way through the field and take over the fifth position. Winebarger would get a good start as O'Connor would move into the second position, but just as things would get going, the yellow would soon come out, this time for an accident in turn one on lap 10, between St. Helens, Oregon driver Todd Hardesty and Olympia's Steve Signal. Signal would stop, and Hardesty would get into the wall, but keep going. This would setup another restart with Winebarger leading the field down, This time Miller would maintain the second position from O'Connor while Winebarger would pull away. Muller would look to the inside of O'Connor for position, but the yellow would fly again for Hardesty, as he would spin in turn one. On another restart, Winebarger would lead the field down, as Kenny Miller and Craig Moore along with Josh Muller would make it three wide coming to the green behind Winebarger and O'Connor. Winebarger would lead, and Miller would slide up to take second momentarily, but Muller and O'Connor would split Miller down the backstretch moving Miller back to the fourth spot. Muller would move into the second position, with O'Connor and Quinn right on his back bumper. Winebarger would start to pull away, but the yellow would come out once again, this time for Kenny Miller who would spin and collect multiple cars, including Craig Moore, Shelton's Scott Miller, Kyler Moore of Seabeck, as well as Cosmopolis driver Tom Sweatman.

The 25 lap feature would be cut down to 23 laps with Collen Winbarger going on to pick up his first Modifed feature at Grays Harbor Raceway with Josh Muller, Chris Quinn, Scott Miller and Kenny Miller rounding out the top five. Heat race winners were Kenny Miller, Carl Larson and Craig Moore.

Grays Harbor Raceway will be taking the weekend off this next Saturday September 6, 2014, but racing will resume on September 13, 2014 with the Shipwreck Bead's Modifieds, USAC Northwest HPD Midget Series, Cut Rate Auto Parts Street Stocks, and the Outlaw Tuners. Gates will open at 5:30 PM, with racing starting at 7:00 PM.