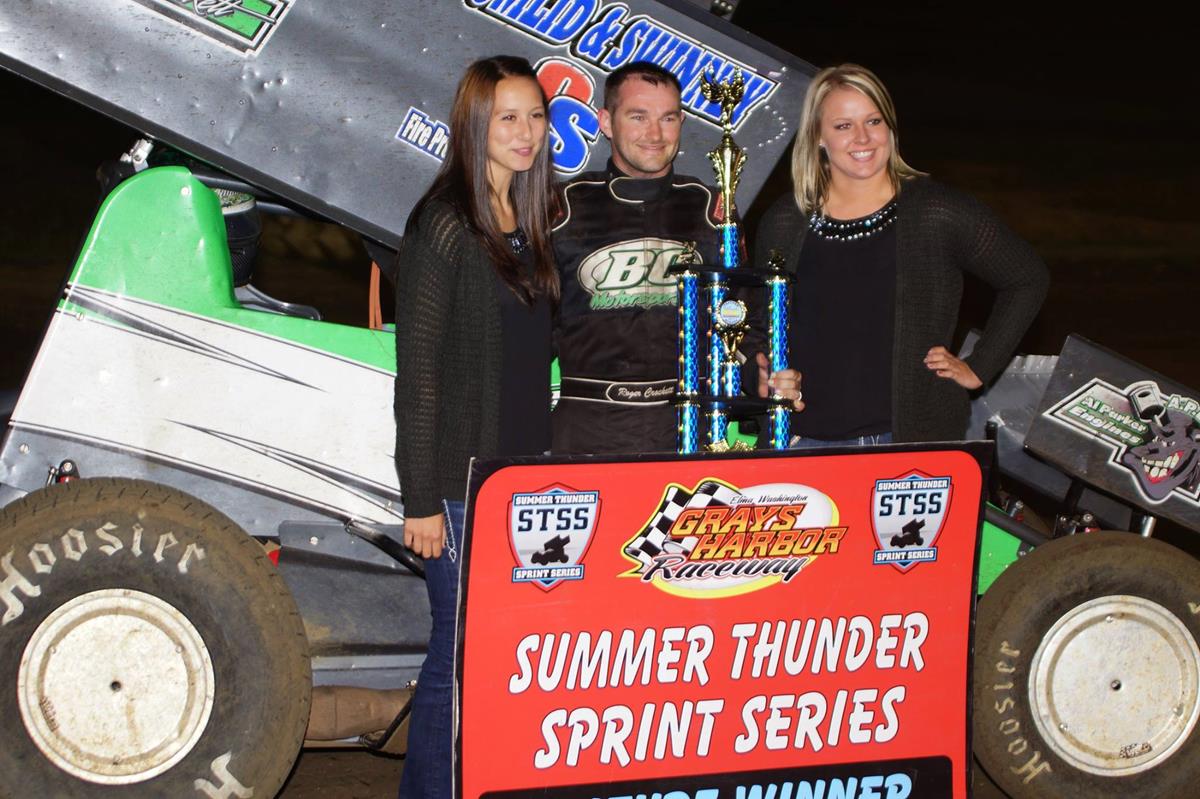 With a lot of racing between Skagit, and Grays Harbor Raceway this weekend, the Summer Thunder Sprint Series made it's final stop to the 3/8's banked clay oval and would crown a champion. Also on tap were the Sportsman Sprints and the Cut Rate Auto Parts Street Stocks.

Colton Heath was looking to pick up the Summer Thunder Sprint Series championship for 2014, but not only that, Heath was looking for win. Throughout the 2014 season, Heath has finished second numerous times at Grays Harbor Raceway. The Marysville driver would start on the outside front row, with Victoria, B.C driver Chris Schmelze. As the field took the green flag on the 30 lap feature, Schmelze would jump to the early lead, but quickly the red flag would come out for Stanwood driver Jared Peterson who would get upside down after a multi car incident in turn four. Other drivers involved were Sedro Woolley's Michael Bollinger, Cobble Hill, BC's Robbie Price, and Eric Fisher of Burlington. Peterson would walk away from the incident, but the car had far too much damage to return. On the restart Schmelze and Heath would race side by side down the front stretch and into turn one. Everett's Jayme Barnes would bobble in turn two, collecting Price, but both cars would keep going, and the field would stay green. Schmelze would lead the first lap, and pull away slightly on Heath. One of the battles to watch was between Shelton's Jay Cole, Issaquah driver Matt Jensen, and Burlington's Jason Solwold for position. Solwold who started deep in the field, and he would would work his way through the field, trying to chase down Heath, as the Summer Thunder Sprint Series points battle was between Heath and Solwold.

Schmelze would quickly hit lap traffic, as he would run the top side of the speedway, he would go very high in turn four, allowing Heath to make the pass on the bottom side of the speedway, and take the lead out of turn four. Heath would work his way through lap traffic, as Medford, Oregon driver Roger Crockett would move into the second position and set his sights on Heath. The yellow flag would soon come out this time for Puyallup's Trey Starks who would come to a stop in turn four on lap 6. Heath would lead the field down on the restart, with Schmelze getting the second position back and Crockett behind both of them. Heath would get a good restart, and lead the field into turn one, but the yellow would come out once again, this time for the passing cone on the front stretch. Heath would lead the field down with another great restart, Enumclaw's Henry Van Dam, would move past Crockett for third, but the yellow would come out once again, this time for Elma driver Jason Reed who would get into the turn one wall.

The Sportsman Sprints would make their second and final appearance to Grays Harbor Raceway for 2014. The 25 lap feature would find Snohomish driver James Bundy on the pole, with Springfield, Oregon driver Allison Journey on the outside. As the field took the green flag, Bundy would lead them down. Bundy would lead them into turn one, with Stanwood's Jared Peterson moving into the second spot getting by Journey. A close call would happen on the opening lap, as Mountlake Terrace driver Daniel McGrew would bobble in turn one, almost going upside down, he did save the car, and keep his car going. Bundy would continue to lead Peterson, but it didn't take long for Peterson to track him down, as he would race side by side with Bundy off of turn four, for the lead. Peterson would race Bundy side by side down the front stretch, and take the lead. Peterson would continue to lead the field, as he would open up a sizable lead on Bundy, Journey would run in the third spot, with Edmonds' driver Devin Barnes running in four. While the race continued to stay green, Peterson would start to hit lap traffic, and work his way through the lapped cars.

The first and only caution of the feature would come out for Cale Brooke of Pepperton, BC, who would spin to a stop in turn four, on lap 19. With the caution coming out, this would allow Bundy another shot at Peterson for the lead, on the restart, Peterson would get a good start, as a lap car would be between Peterson and Bundy. Peterson would continue to lead the field and pull away. The battle to watch as the laps began to wind down was between Bundy and Journey, as Journey would look to the inside of Bundy for second. They would race side by side for a handful of laps, with Journey taking the second spot from Bundy down the backstretch.

The 25 lap Cut Rate Auto Parts Street Stock feature would see Olympia's Eddie Blood, who picked up his first career win at Skagit Speedway last weekend, and Matt Babcock of Hoquiam on the front row. As the field took the green flag, Blood would get the lead, with Babcock in chase, but the yellow would quickly come out, and a complete restart would follow. On the restart, Blood would once again, take the lead, with Babcock, Hoquiam's Jason Tole, and another Hoquiam driver Jack Parshall racing for position. Tole would slip back to the fifth spot early, as Shelton's Brenton Schnitzer would move into the fourth position. Blood would lead them down for the first lap, as Parshall would race Babcock for the second position. The yellow would quickly come out, this time for 2 cars spinning in turn one, on lap 1, those drivers were Tyler Walker of Elma, and Shannon Redle of Tumwater.

On the restart, Blood would once again lead them down, as Parshall would slip into the second position. Parshall would work the back bumper of Blood, and look to take the lead out of turn four, they would race side by side, but Blood would keep the lead. The yellow would come out once again for a slowing Tim Phillips of Spanaway down the front stretch on lap 2. this would setup another restart, and Blood would lead them down, with Parshall on his back bumper. Blood would pull away slightly, but it didn't take long for Parshall to close in, as he would work the high side of the speedway. The battle to watch would be for the third position as Babcock, Schnitzer, and Tole would all race for position, almost getting three wide out of turn four, Babcock would continue to run in the third position, but the yellow would come out once again, this time for Spanaway driver Tom Hecker, who would slow on the backstretch.

Blood would lead the field down, with Parshall getting a better start, and staying right on his back bumper. Schnitzer would move past Babcock for the third position, while Parshall would look to the outside of Blood for the lead off of turn four, and take the lead in turn one. Parshall would start to pull away slightly, as Blood would work hard on the bottom side of the speedway. The yellow would once again come out for Redle, as he would slow down the front stretch and come to a stop in turn one on lap 6. Parshall would lead the field down, with Schnitzer moving past Blood for second. Schnitzer would set his sights on Parshall, as the battle for third would head up between Tole and Blood. Parshall would pull away slightly from the field as the drivers behind him would battle for position. It wasn't long before the yellow flag would come out again, this time for Tyler Walker who would spin in turn two on lap 8. Parshall would lead the field down, as Blood would get back into the second position from Schnitzer. Wishkah driver Don Briggs Jr. would join in on the mix, as the second position would become a four car battle between Blood, Schnitzer, Briggs Jr., and Tole. Blood would continue running in the second position, as Briggs Jr. would slip into the third spot.

Many cautions would plague the feature event for the Street Stocks, but at the end of the 25 laps, Jack Parshall would continue his hot streak of wins, with Jason Tole, Eddie Blood, Brenton Schnitzer, and Tom Hecker rounding out the top five. Heat race winners were Jason Tole and Jack Parshall, with Eddie Blood picking up fast time.

Racing will resume Monday September 1, 2014, with the STP World of Outlaws Sprint Cars and the Modifieds. Gates will open at 5 PM, with racing at 7 PM 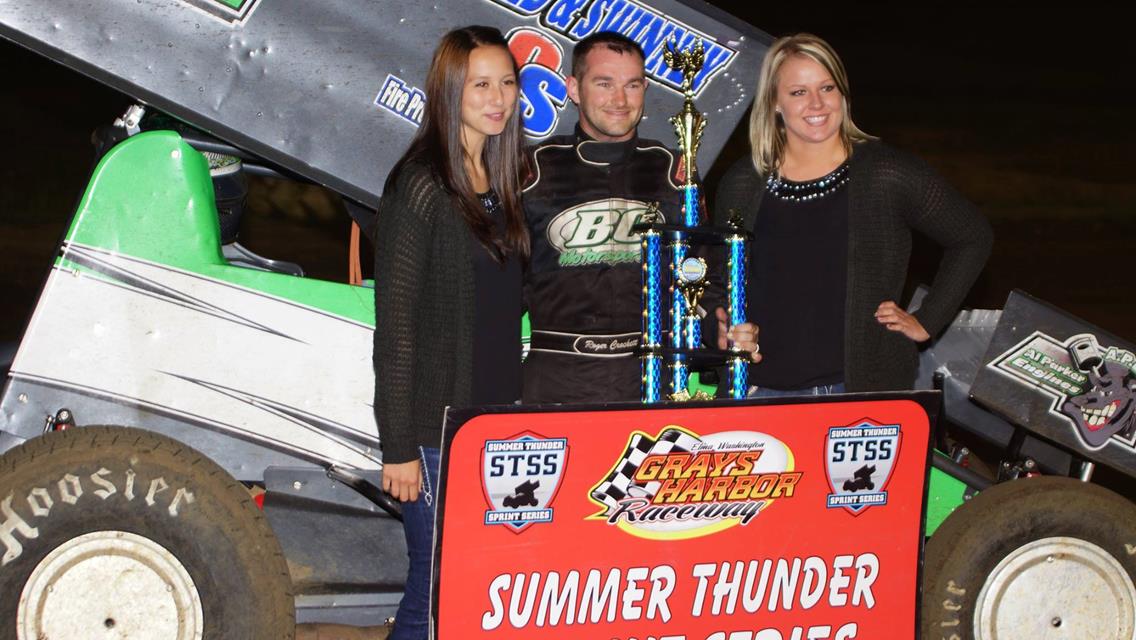 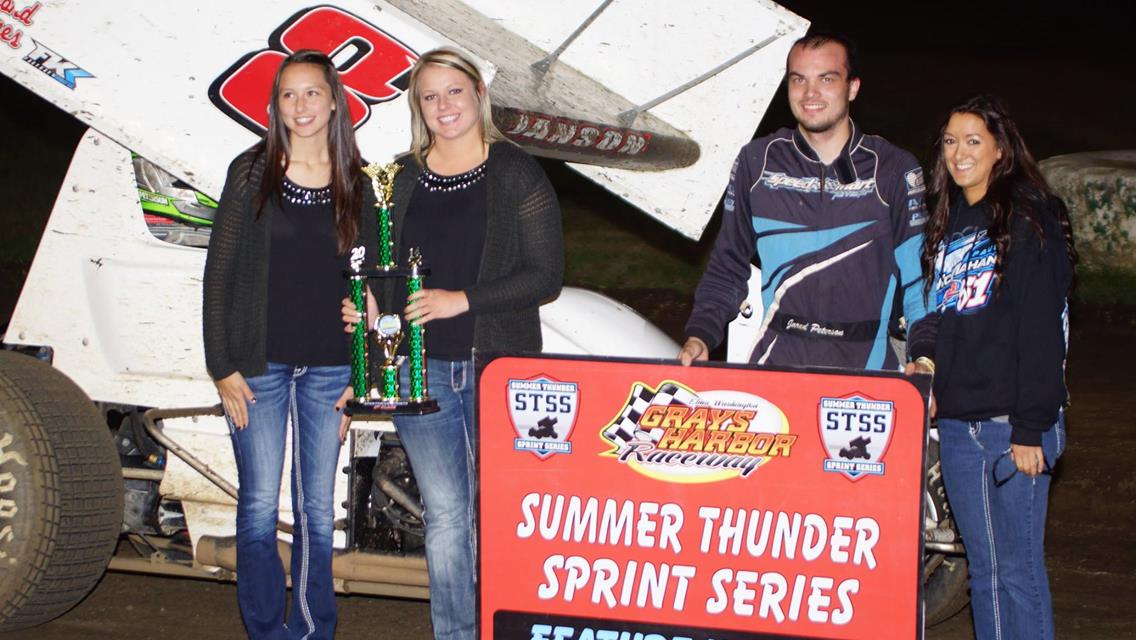 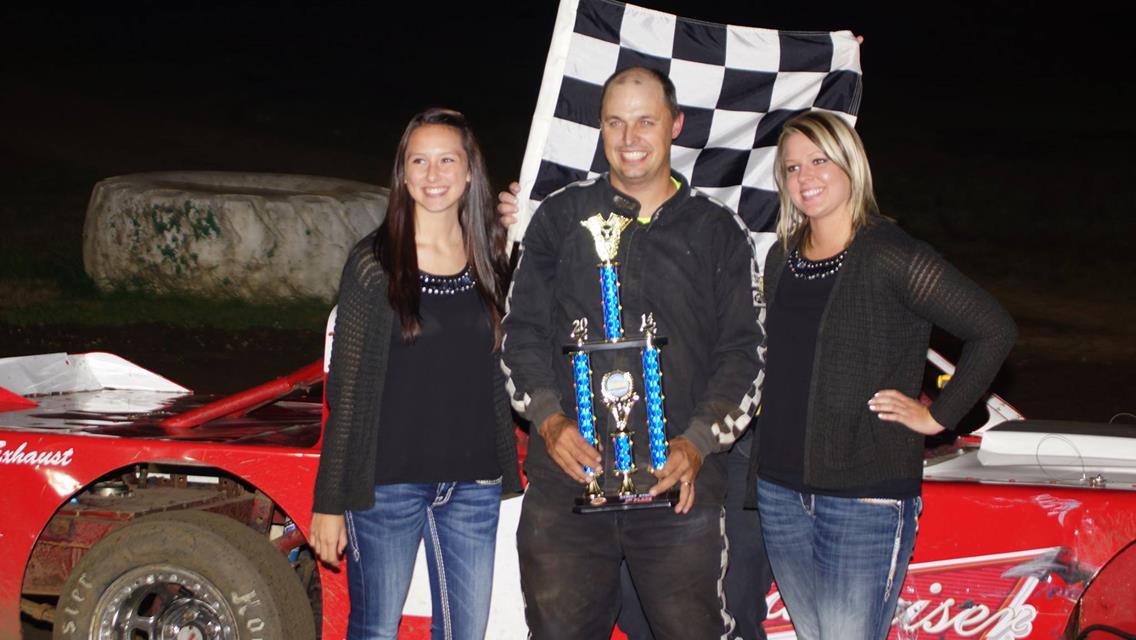