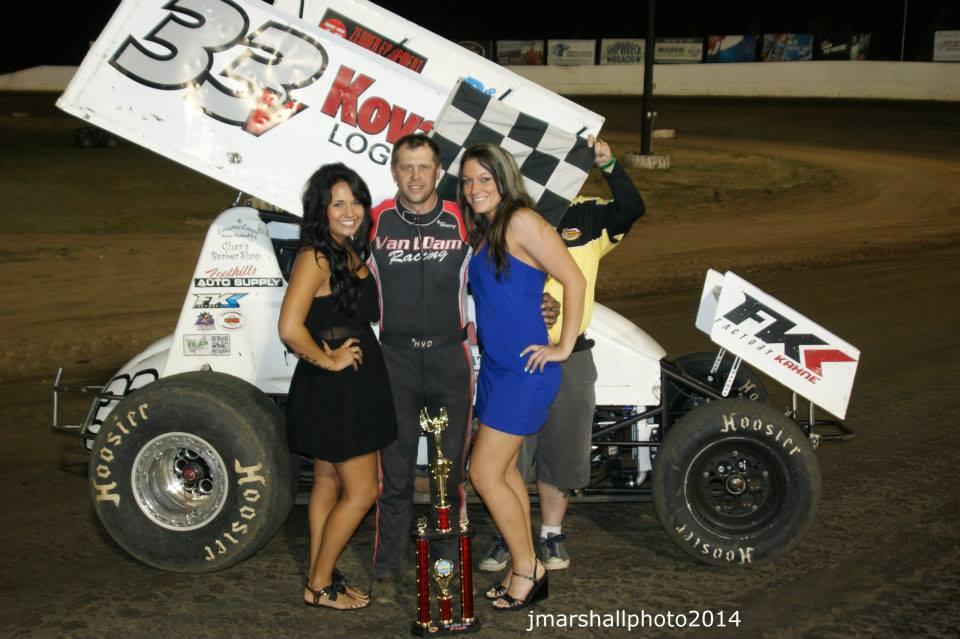 VanDam Makes it Six on the Season

The Pacific Hard Top Racing Association Dwarf Cars would hit the track for the final time in 2014 at Grays Harbor Raceway. Portland, Oregon driver Jim Fischer, and Westland, Oregon's Tim Hester would start on the front row of the 25 lap feature. Hester would take the lead from Fischer on the start, with Kevin Benson of Cascade Locks, Oregon taking over the second position with Jess Turner Jr. of Kelso in chase. Hester would pull away slightly from the field, but behind them, there were battles all over the track. Turner Jr would look under Fischer for the third spot out of turn four and pass him down the front stretch. The battle for fourth, fifth and sixth would get very exciting, as Fischer, Happy Valley, Oregon's Leo Ward, and Ryan McVae of North Bend, would go three wide into turn three. McVae would take over the fourth spot, and look to chase down Turner Jr. Fischer would battle with Ward, and John Chrisman of Albany, Oregon for the fifth spot. Meanwhile up front Benson would look to track down Hester for the lead, getting close a few times, as he would stalk the back bumper of Hester. Gaston, Oregon driver Corey Estaban, would work his way through the field and race for the fourth, spot with McVae and Chrisman

Estaban, McVae, and Chrisman would race for a handful of laps for the fourth position, meanwhile Turner Jr, and Benson would battle for the second position. This would allow a slight lead for Hester, as Benson and Turner Jr would race side by side until Turner Jr would take over the second position from Benson. The battle for third would be a four car battle between Benson, Chrisman, McVae and Estaban. Chrisman would take the position away from Benson. The field would start to hit lap traffic, which allowed Turner Jr to track down Hester, and make the pass on Hester for the lead out of turn four. Turner Jr, would take over the lead moving Hester back to second. Hester would try to look to the high side, but the yellow flag would come out for Steve Taylor of Port Townsend, who would spin in turn three on lap 12.

On the restart, Turner Jr would lead them down, with Chrisman moving into the second position, and Benson would get around Hester for third. The battle for second would turn into a three car battle between Chrisman, Benson, and Henry Corbin III of Mollala, Oregon. Chrisman would move into second, Corbin III would take over third, and Estaban would go into the fourth position. Estaban would soon race with Corbin III for the third spot, as the top four would get real close. Turner Jr would continue to lead, Chrisman would run second, Estaban would get side by side with Chrisman to try to take over the position, and Corbin III would be right behind them. Estaban would take over the second spot, and look to track down Turner Jr, who had a slight lead over the field. The yellow flag would come out again, this time for Charles Millar of Gresham, Oregon, who would slow to a stop out of turn two.

The Shipwreck Bead's Modified division saw a very good 25 lap feature, with Kris Asche of Shelton and Joe German of Wishkah on the front row. German, who is getting ready to to head back to Boone, Iowa for the Super Nationals, and being the only Washington driver in the All-Star Invitational would make his first appearance of the year to shake down his car. As the field took the green flag, German and Asche would race side by side, German would get the advantage out of turn two and take the lead. Asche would slow out of turn two, and pull to the infield with mechanical issues down the backstretch. German would continue to lead, with Seabeck's Kyler Moore behind him. Scott Westley of Centralia would run in third, as he would race with Kelso's Carl Larson. Earlier in the night, Seabeck driver Craig Moore lost a motor during the heat race, figuring he was done, but Mel Decker of Mt. Vernon would give up his car to Moore so he could run it in the feature. Moore would start in the back of the feature, but it didn't take long for him to make it through the field. Moore would race with Austin Kerrigan of Aberdeen early in the main event, racing side by side with him for a few laps before taking over the position. The battle for third would be exciting to watch between Westley, Larson, and Olympia's Alan Muenchow. Larson would look to take over the third spot from Westley out of turn four, and race with him down the front stretch. Larson would move into the third spot, with Muenchow looking to get by Westley for the fourth position, he would get that position in turn two.

Craig Moore would work his way past Kerrigan and Westley, setting his sights on Muenchow, but contact between Muenchow and Moore would cause Moore to slow down the front stretch and bring out the caution as he would stop in turn one on lap 7. On the restart with was German leading Kyler Moore, Larson, Muenchow and Kerrigan to the green flag. German would continue to lead as the battle for third would be the one to watch between Kyler Moore and Kerrigan, both drivers would race side by side down the front stretch, with Kerrigan moving into third. The yellow would come out once again for Westley who would hit the wall in turn four on lap 10. German would lead them down once again, with Larson, Kerrigan, and Shelton's Scott Miller in the mix. Craig Moore who had the early race mishap, would look to the high side and get around Kyler Moore, Scott Miller, and Larson out of turns one and two. He would then set his sights on Kerrigan for second.

Moore would run the high side of the speedway, and take the second position from Kerrigan out of turn four. Moore would race side by side with Joe German into turn three, and out of four, making it a battle for the lead. German would run the bottom of the speedway, with Moore up top. Moore would look to the high side out of turn two and take the lead down the backstretch. German would try to take the lead back in turn four, but Moore would pull away. Scott Miller would work his way into the fourth position getting around Larson and would look to go after Kerrigan for third. Moore would continue to pull away from German. The yellow would come out once again, this time for Kerrigan, who was having a great run in the third position. Kerrigan hit the uke tire in turn four, and a lap later would slow to a stop in turn four on lap 20 while running third.

Craig Moore would lead them down on the final restart of the feature, with German, Scott Miller, Muenchow and Larson right there to strike at any mistake. Moore would power down the front stretch, with German looking to try and make the pass for the lead in turn one. Moore would then pull away from the field. Scott Miller would look to take over the second spot from German, as they would race side by side for a lap, but German would keep the position. At the end of the feature, Craig Moore would pick up the win, with Joe German, Scott Miller, Carl Larson, and Alan Muenchow rounding out the top five. Heat race winners were Asche and German.

The 25 lap 360 sprint car feature saw Enumclaw's Henry Van Dam, and Quilcene driver J.J Hickle on the front row, as the field took the green, Van Dam would jump to the early lead. Colton Heath of Marysville would look to the inside of Hickle out of two and down the backstretch, with Snohomish's Reece Goetz in chase. Van Dam would start to pull away from Hickle, but the red flag would come out for Steve Reeves of Valleyview, Alberta and Robbie Price of Cobble Hill, British Columbia on lap 3. Reeves would be up on his side, both drivers were ok.

On the restart, Van Dam would lead them down, with Hickle and Heath racing for the second position. Heath would look to the bottom of the speedway out of turn four to take the second position from Hickle who would run up on the high side, Heath would race Hickle down the front stretch and take the second position out of turn two. Heath would set his sights to try and track down Van Dam, who would continue to pull away. It wouldn't take long before Van Dam would hit lap traffic, which would allow Heath to reel him in. Van Dam would have to deal with 2 lapped cars battling for position. Heath would get to the back bumper of Van Dam, making for a very exciting race for the lead. Heath would look to the inside of Van Dam in turn one, briefly taking the lead, but Van Dam would use the high side and get the lead back. A lap later Heath would try the same move, but couldn't pull it off, allowing Van Dam to keep the lead. This also allowed Hickle to catch both drivers as they would work through lap traffic. Van Dam would work through traffic, and would pull away enough that Heath couldn't pull any slide jobs on him, both Van Dam and Heath would run the high side of the speedway.

As the leaders would hit more lap traffic, Heath would start to pull closer to Van Dam. A few laps later Heath would look to the inside of Van Dam out of turn four, but Van Dam would have the momentum down the the front stretch. The yellow flag would come out on lap 20 for Bud Ashe of Concrete, Ashe would spin in turn four. The restart would setup a five lap shootout for Van Dam and Heath. Van Dam would lead the field down with Heath on his back bumper. Heath would try to take the lead from Van Dam in turn one, but Van Dam would run the high side and continue to lead, with Heath right on his back bumper. A lap later, Heath would try to pull off a slide job in turn two, but Van Dam would stay on the high side of the speedway and continue to lead and start to pull away from the field. At the end of the feature, Henry Van Dam would pick up another win at Grays Harbor Raceway, Colton Heath, J.J Hickle, Tacoma's Evan Margeson, and Burlington driver Eric Fisher would round out the top five. Heat Race winners were Heath and Goetz, with Van Dam picking up quick time.

As the Outlaw Tuner feature would go green to checkered. Chad Norton would pick up the win, Ocean Shores driver Jeff Daniel would finish second, with Willie Wright, Ryan O'Nasch, and Don Briggs Sr. rounding out the top five. Head race winners were O'Nasch and Norton.

Racing will resume next Sunday and Monday. On Sunday August 31st, it will be the final round of the Summer Thunder Sprint Series, with the Sportsman Sprints, and Street Stocks. Monday September 1st, the STP World of Outlaws will take to the 3/8's banked clay oval, with the Modifieds. Gates will open both nights at 5:30 PM, with racing starting at 7:00 PM. 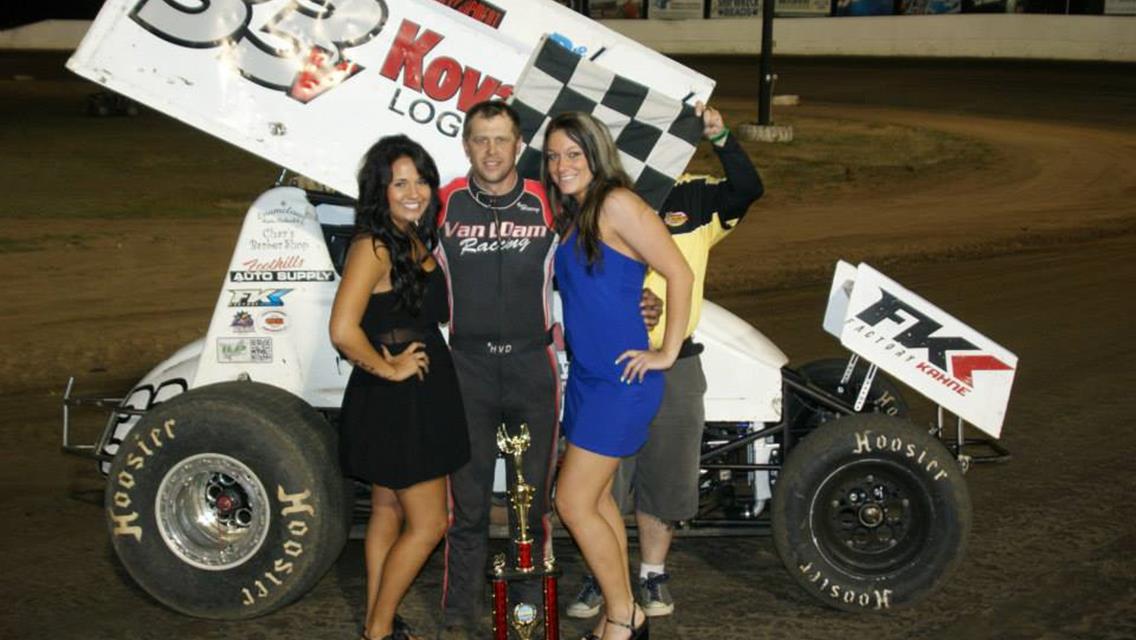 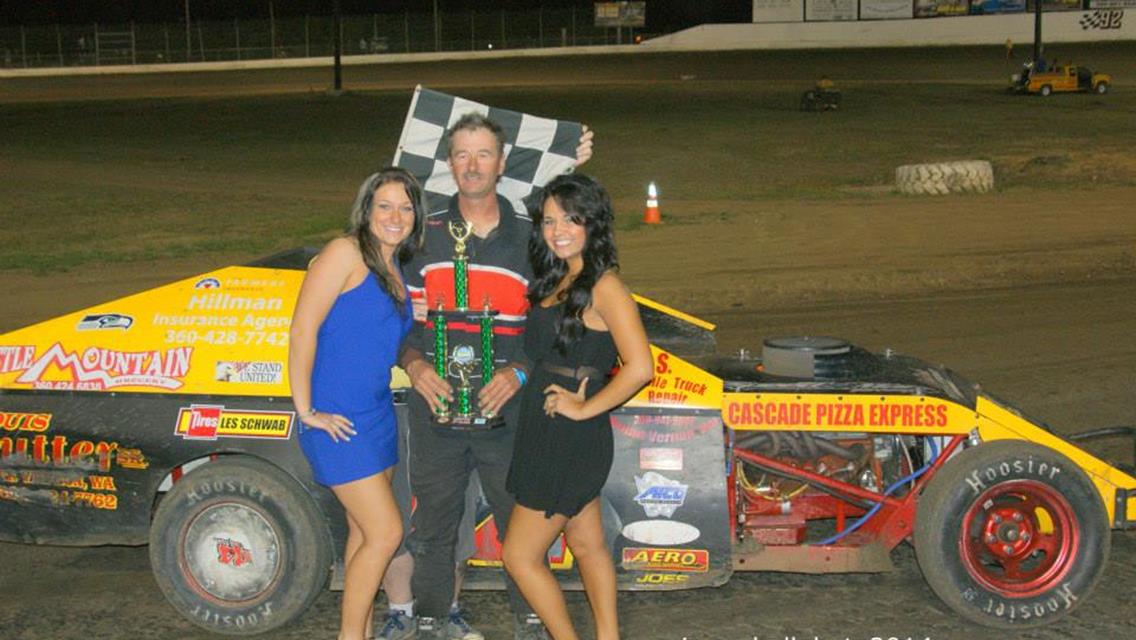 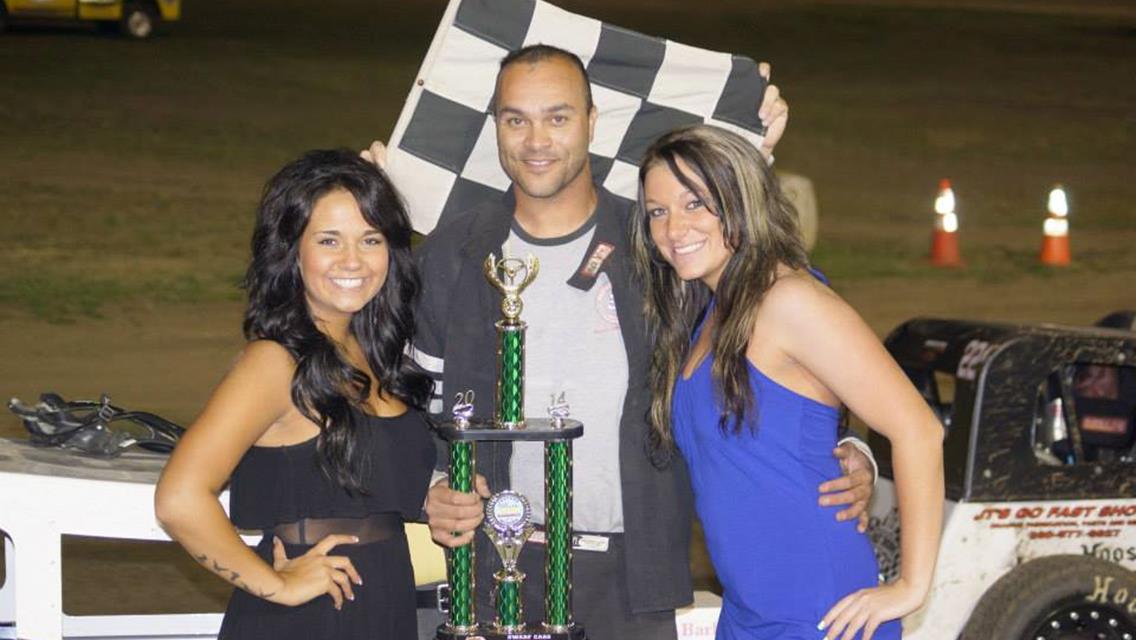 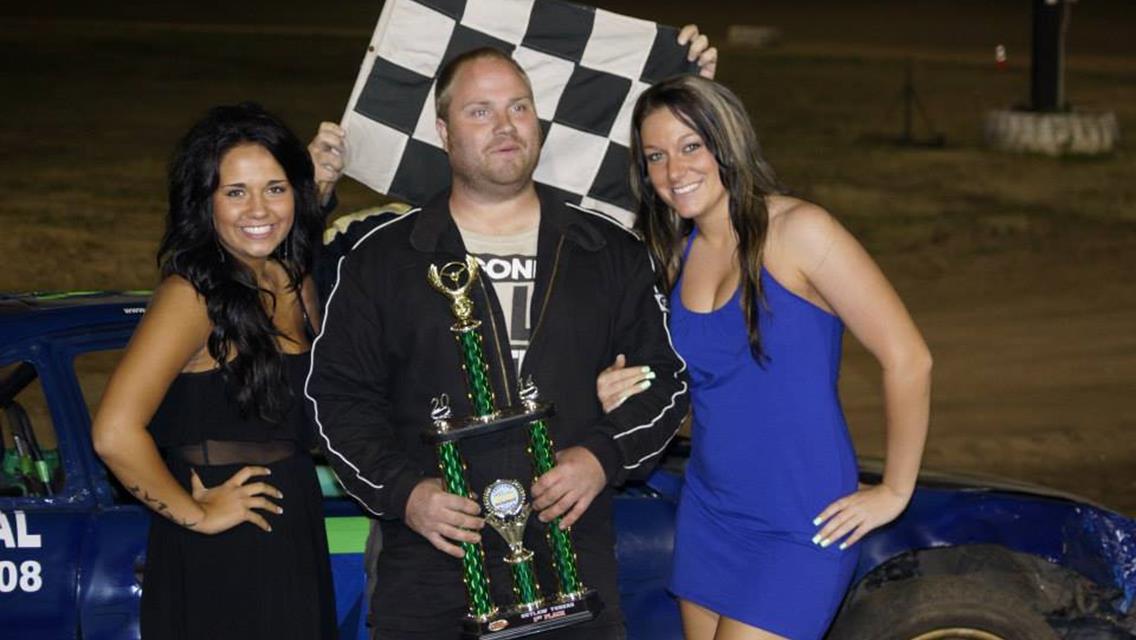