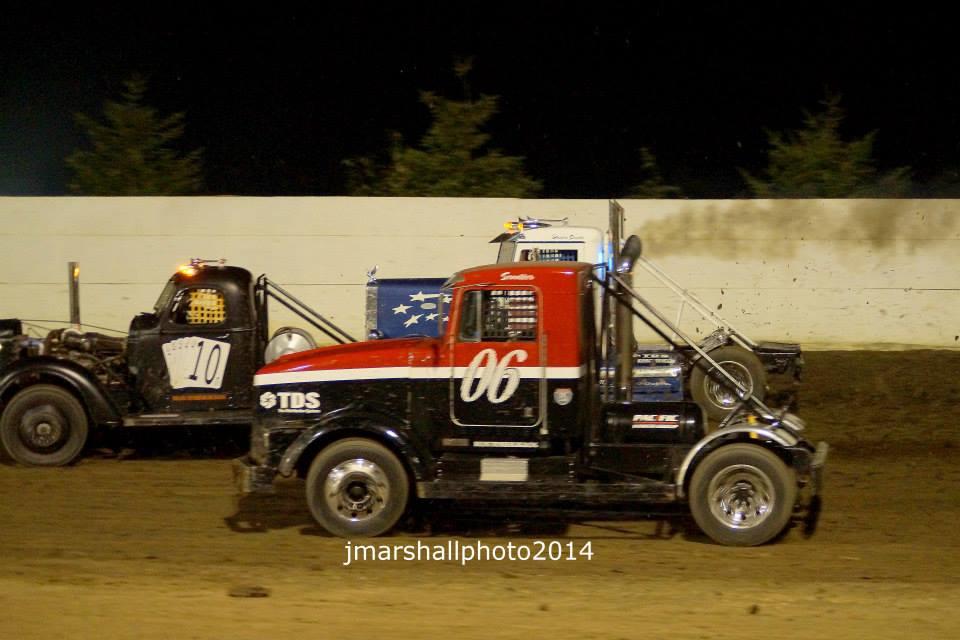 The Cut Rate Auto Parts Street Stocks, USAC Northwest HPD Midget Series, and the Rolling Thunder Big Rigs treated the fans with a great night of racing around the 3/8's banked clay oval at Grays Harbor Raceway. With the weather in the mid 80's, the fans would fill the stands, for some dirt track racing.

Tacoma's Mike Knox, and Don Briggs Jr of Wishkah would lead the field of Street Stocks down to the green flag for their 25 lap feature. Knox would take the lead early into turn one, with Briggs Jr, and Jack Parshall of Hoquiam. Just as the green flag would fly, the yellow would come out for Aberdeen's Cory Sweatman who would slow to a stop in turn two. This would set up a complete restart. On the restart Knox and Briggs Jr would race side by side down the front stretch and into turn one, Knox would get the slight advantage in turn two, and pull away down the backstretch, allowing Briggs Jr and Parshall to battle for second. Parshall would get by Briggs Jr for second and make a shot for the lead getting side by side with Knox down the front stretch and taking the lead into turn one. Parshall would pull away slightly, with Knox right behind him, Briggs Jr, and Vancouver's Craig Loomis would race for the third position. Olympia's Eddie Blood would also join in on the mix for the third position. Parshall would continue to pull away, and Briggs Jr would get around Knox for the second position, setting his sights on Parshall. The battle for third would heat up between Knox, Blood, and Loomis, Blood would take the third position from Knox, and Loomis would follow. Aberdeen driver Austin Kerrigan would also look into the picture, as he would race with Loomis for the fourth position. Parshall would hit lap traffic early, as the battle for second position between Briggs Jr, and Blood would get very exciting, especially through lap traffic. Briggs Jr and Blood would race side by side, being cautious, Blood would stay in the third spot going through lap traffic. Blood would look to the inside out of turn four at Briggs Jr, but Briggs Jr. would pull away slightly.

Blood and Briggs Jr would battle for a handful of laps while Parshall would extend his lead on the field. The yellow would come out on lap 12 for Mike Knox as he would slow to a stop in turn one. On the restart, Parshall would lead them down, with Blood moving into the second position around Briggs Jr. Blood would then look to track down Parshall for the lead, even looking to the inside a few times. Parshall would pull away slightly down the front stretch, but Blood would catch him in the corners. The yellow would come out once again, this time for Westport driver Taylor Miller, who would come to a stop in turn two on lap 15. Parshall would once again lead the field down, and pull away slightly on the restart. Blood would start to catch him once again, with Briggs Jr, Loomis, and Brenton Schnitzer of Shelton joining in the mix. Parshall would start to pull away as the laps would wine down, with the battle between Blood, Briggs Jr, and Loomis for second, third, and fourth would be the race to watch.

At the end of the 25 lap feature, Jack Parshall would pick up the win, and continue his hot streak for the 2014 season. Eddie Blood, Don Briggs Jr., Brenton Schnitzer, and Westport driver Mike Clingen would round out the top five. Heat race winners were Mike Knox, and Don Briggs Jr, with Jack Parshall picking up fast time.

Chase Goetz was looking to make it two in a row in the USAC Northwest HPD Midget Series, and also looking to sweep the weekend's Midget Nationals. Goetz would start on the front row with Shorline driver Hannah Lindquist for the 30 lap feature. Goetz would waste no time and take the lead. The yellow would quickly come out for Annika Johanson of Centralia, as she would come to a stop on the backstretch. On the restart, Goetz would once again jump to the lead. Dougie James of Shorline would jump into the second position. Goetz would start to pull away, as James, Lindquist, McCleary's Garrett Thomas, and Burlington driver Tristin Thomas would battle for position, making it a four car battle for second. Garrett Thomas would get around Lindquist for third, and set his sights on James for second. Thomas would get around James, but James would look to the inside and battle back.

Goetz would continue to pull away, making his lead to almost a straightaway on the field, but the excitement for the positions behind him were the battles to watch. The yellow would come out once again for Johanson as she would spin to a stop in turn two. On the restart Goetz would get a good start, but so would the cars behind him. Dougie James would move back into second around Garrett Thomas, but just as the battle for second was starting to heat up. The yellow would come out again for Michael Vollbrecht of Shorline who would come to a stop on the front. The caution would set up another restart for the field to try to make their move on Goetz for the lead, but this time Goetz was ready, and got a great restart. James would continue to run in the second position, as Garrett Thomas and Hannah Lindquist would battle for third. Garrett Thomas would get shuffled back a few positions allowing Tristin Thomas, and Lance Sargent of Spanaway to get by. Goetz would continue to lead, working the low side of the speedway. James would run the high side, to try and find some momentum to track down Goetz. Garrett Thomas would start to work his way through the field and make up those positions he lost, racing with Sargent for position.

The Rolling Thunder Big Rigs made their appearance to Grays Harbor Raceway this year, bringing 9 big rigs for the fans to enjoy. The 25 lap feature saw Hollywood Brian Wilson of Rochester on the front row with Loopy John Nelson of Rochester on the outside. As the field took the green flag, Wilson and Nelson would race for the lead, with Nelson taking the lead out of turn three and pull away. Iron Man Mickey Iverson of Rochester would also join in on the mix as Wilson and Nelson would battle for the lead. As the top 2 trucks would race side by side for a handful of laps, Wilson would eventually take the lead, and start to pull away slightly. Tacoma's Dustin Smith would join in on the mix, as he would battle with Nelson and Iverson for the second spot going three wide out of turn two. Nelson would have the advantage as Iverson and Dustin Smith would battle for position behind them. Right behind them, Centralia's Diamond Dave Barr would join in on the battle, as well as Scott Zahn of Rochester. Nelson, Dustin Smith, and Iverson would make it three wide again with Smith taking the advantage.

Dustin Smith would start to reel in Wilson for the lead. Wilson would hold him back, until Smith would race side by side with Wilson out of turn four. Barr would also join in on the mix, making it a three truck battle for the lead. Wilson would continue to lead, but Dustin Smith would be lurking on the outside, with Barr right in the middle, making it three wide out of turn four. Barr would take over the lead from Wilson, with Zahn coming out of nowhere to join in on the fight for the lead. Barr would continue to lead, with Smith and Zahn right behind them. The battle for the lead would change later on with Dustin Smith taking the lead from Barr. Smith would lead the field to the white flag, Barr and Zahn would race side by side with Smith into turn three, and out of four with Barr taking the slight advantage making it a drag race between Barr and Zahn to the line. Diamond Dave Barr would pick up the win, Scott Zahn, Dustin Smith, Steve Smith, and Mickey Iverson would round out the top five. Heat races went to Tom Rayton of Centralia, and Scott Zahn.

Racing will resume next Saturday night at Grays Harbor Raceway, with the 360 Sprint Cars, Modifieds, Outlaw Tuners, and the third appearance by the Pacific Hardtop Racing Association Dwarf Cars. Gates open at 5:30 PM, and racing starts at 7:00 PM. 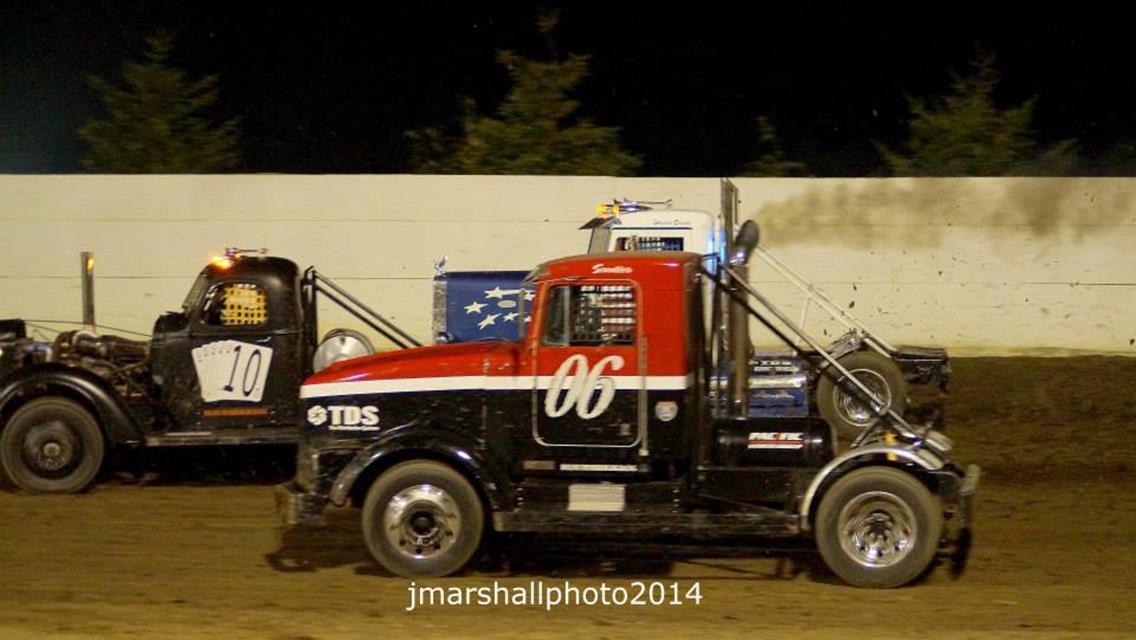 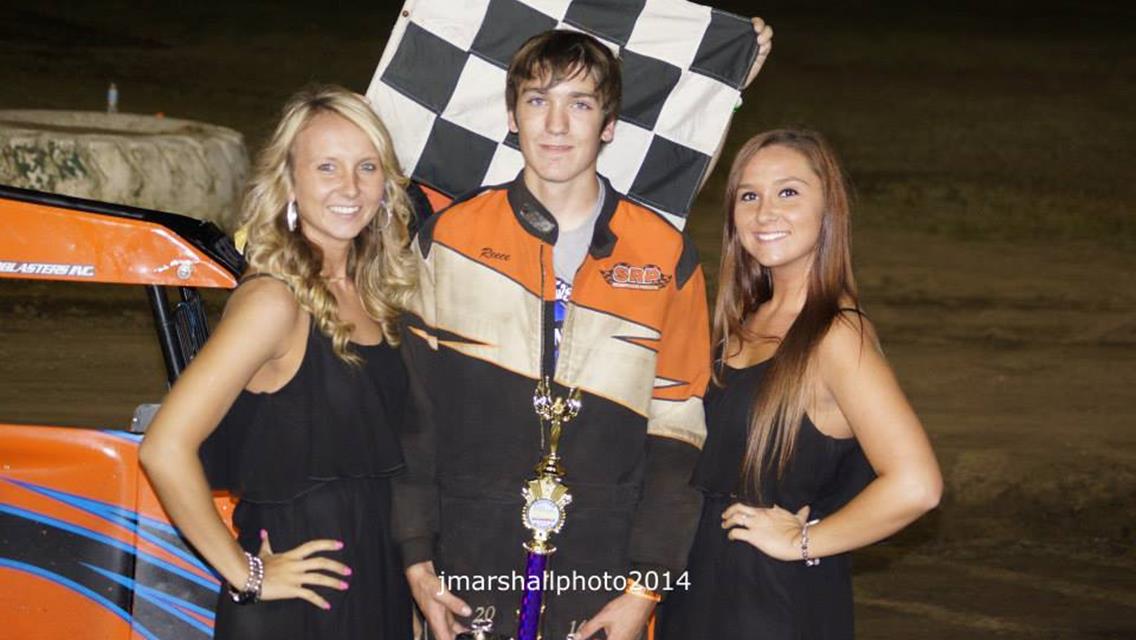 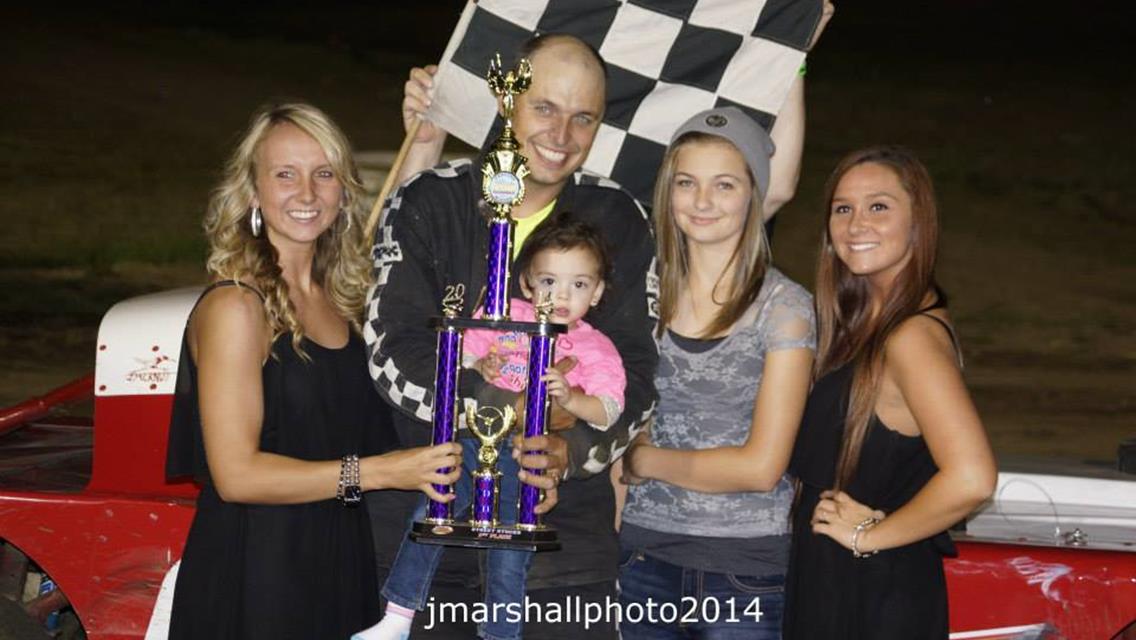