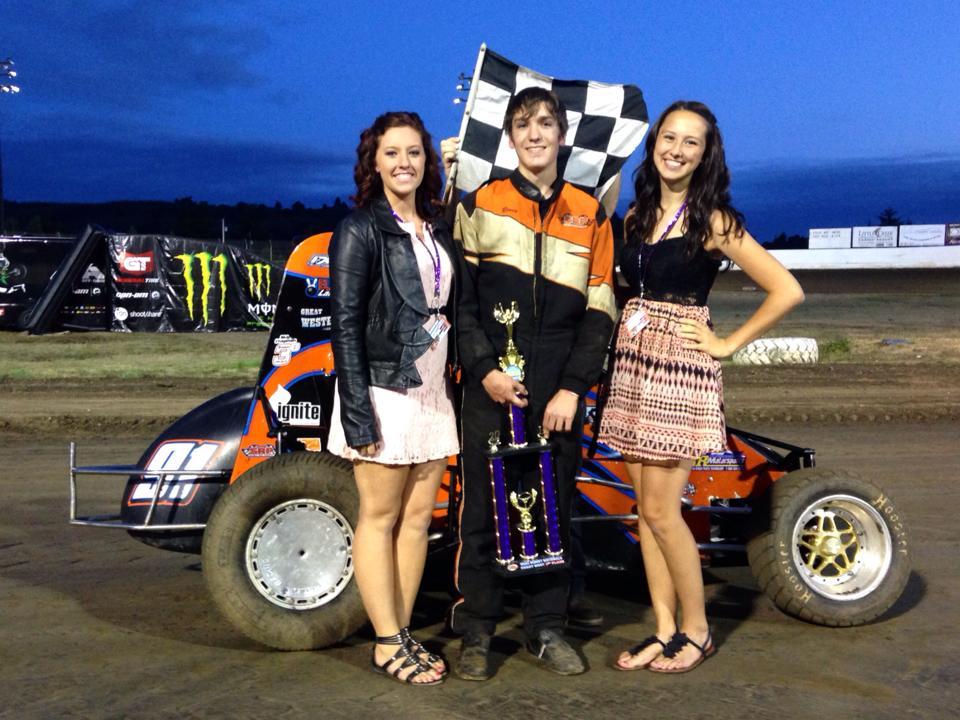 Grays Harbor Raceway fans were treated with a great night of racing, with the Shipwreck Beads Modifieds, USAC Northwest HPD Midget Series with their first night of the Midget Nationals, and a very special appearance by the Monster Energy Freestyle Motocross, doing crazy stunts, and bringing the fans to their feet.

Shelton's Scott Miller and Redmond, Oregon driver Mark Carrell would set the front row of the 25 lap Shipwreck Beads Modified feature. Carrell who was last week's winner during the fair race, was looking to go 2 in a row. Miller would take the lead, with Carrell, and Seabeck's Craig Moore in chase. Moore would move into second around Carrell, but would spin in turn four after clipping one of the tires on lap one bringing out the first caution of the evening. On the restart, Miller would lead the field down, with Carrell, and Port Hardy, British Columbia driver Lawrence O'Connor in chase. Miller would pull away slightly, and it was a battle of the 27 cars, as O'Connor and Carrell would race side by side for the second position. O'Connor would run the high side, with Carrell on the bottom of the speedway, with Carrell taking the position back from O'Connor in turn four. The top 3 would race close for a handful of laps, while McCleary's Josh Muller would join in the mix, and make it a four car battle for the lead. The battle for the fifth position was one of the many battles to watch between Seabeck's Kyler Moore and Kris Asche of Shelton, as they would race side by side for position, meanwhile, Muller would work the low side of the speedway, and get around O'Connor for the third position, and work on Carrell for second.

Miller would continue to lead, with Carrell and Mller in chase. Carrell would get close to Miller out of turn four, and get as far as getting close to the quarter panel, but could not make the pass. He would also try the same pass, out of turn two, but couldn't make the pass, allowing Muller to get a run on Carrell for the second position. Muller would try to make the move out of turn four, but Carrell and Muller would make a little contact. Carrell would gain slightly on Miller in the corners, but Miller would pull away on the straightaways. Muller would get an advantage on Carrell out of turn four, and take over the second position, looking to hunt down Miller for the lead. The yellow would come out once again for Craig Moore, who would spin to a stop in turn four on lap 11. On the restart Miller would lead them down, but Muller would work the outside and get around Miller for the lead. Miller and Carrell would battle for second, with Carrell taking over the second spot from Miller out of turn two. Asche and O'Connor would race for the fourth and fifth positions right behind them. Muller would start to pull away from the field, making his lead to half a straightaway. The battle to watch was for the third spot, between Miller, O'Connor, and Craig Moore. O'Connor would take over the third spot, in the middle of turn three and four from Miller, as well as Craig Moore, who would rebound after spinning twice in the feature. The final caution would come out this time for Raymond's Bill Rowe, who would come to a stop turn one.

On the restart, Muller would get a good start, and lead the field down, pulling away from the field, as Carrell, O'Connor, and Moore would battle for position. Moore would look to the inside of O'Connor a few times, but couldn't make the pass. O'Connor would also look to the inside of Carrell a handful of times for second, but Carrell would have the advantage on the high side of the speedway. At the end of the 25 lap feature, Josh Muller would pick up his first win of the season, with Mark Carrell finishing second, and Lawrence O'Connor third. Heat races went to Craig Moore and Lawrence O'Connor.

With a few weekends off at Grays Harbor Raceway, the USAC Northwest HPD Midget Series were on hand for Night 1 of the Midget Nationals. In the 20 lap feature, Montesano's Jeremy Miller would lead the field down, with Spanaway driver Lance Sargent starting on the outside front row, as they took the green, Miller would lead them into turn one. Snohomish's Chase Goetz, who has been very successful in the series, would try to make it three wide with Sargent, and McCleary's Garrett Thomas for position. Goetz would move into the third spot, and try to make it three wide for the lead with Miller and Sargent. Goetz would take the lead from Miller in turn one. Miller would try to get the position back out of turn two, making contact with Goetz's right rear tire, Miller would keep going, and not lose any position. As Goetz pulled away, a four car battle would enuse between Miller, Sargent, Garrett Thomas, and Burlington's Tristin Thomas. Sargent would look to the outside of Miller for second down the back stretch, and race side by side with him into turn three and four. The battle would continue down the front stretch and into turn one, both drivers staying side by side with each other. Sargent would take over the second position down the backstretch, and Garrett Thomas would look to the outside of Miller. Garrett Thomas would take the third position away from Miller down the backstretch, where he would set his sights on Goetz and Sargent.

Goetz would continue to pull away from the field, having a straightaway lead. Garrett Thomas would pass Sargent for second down the backstretch as the battle for second, third, and fourth would get exciting for the fans. Tristin Thomas would also get around Miller for the fourth position. The first red flag of the evening would come out on lap 9 for Sargent, as he would get upside down in turn four. Sargent was ok, and the car was pushed back to the pit area, as he would only go over once. On the restart, Goetz would lead the field down, with Garrett and Tristin Thomas right on his back bumper. Tristin Thomas would try to look to the outside fo Garrett Thomas for second down the backstretch but could not make the pass. Garrett Thomas would look to try and take the lead from Goetz in turn one, working the high side of the speedway, but Goetz would pull away slightly.

At the end of the 20 lap feature, Chase Goetz would pick up the win, with Garrett Thomas, Tristin Thomas, Jeremy Miller, and Mike Vollbrecht rounding out the top five. Heat race winners were Garrett Thomas and Chase Goetz

The fans were treated to three sessions of freestyle from three riders doing crazy stunts on a ramp set up in the middle of the infield. During their sessions there was crowd participation, voting on which rider did the best stunts, and getting the crowd into it. At the end of the competition, the riders would all three hit the ramp, doing crazy stunts and back flips, getting the crowd on their feet.

Racing will resume, Saturday August 16, 2014, with the Cut Rate Auto Parts Street Stocks, USAC Northwest HPD Midget Series for Night 2 of the Midget Nationals, and the appearance of the Rolling Thunder Big Rigs. Gates open at 5:30 PM, with racing at 7:00 PM. 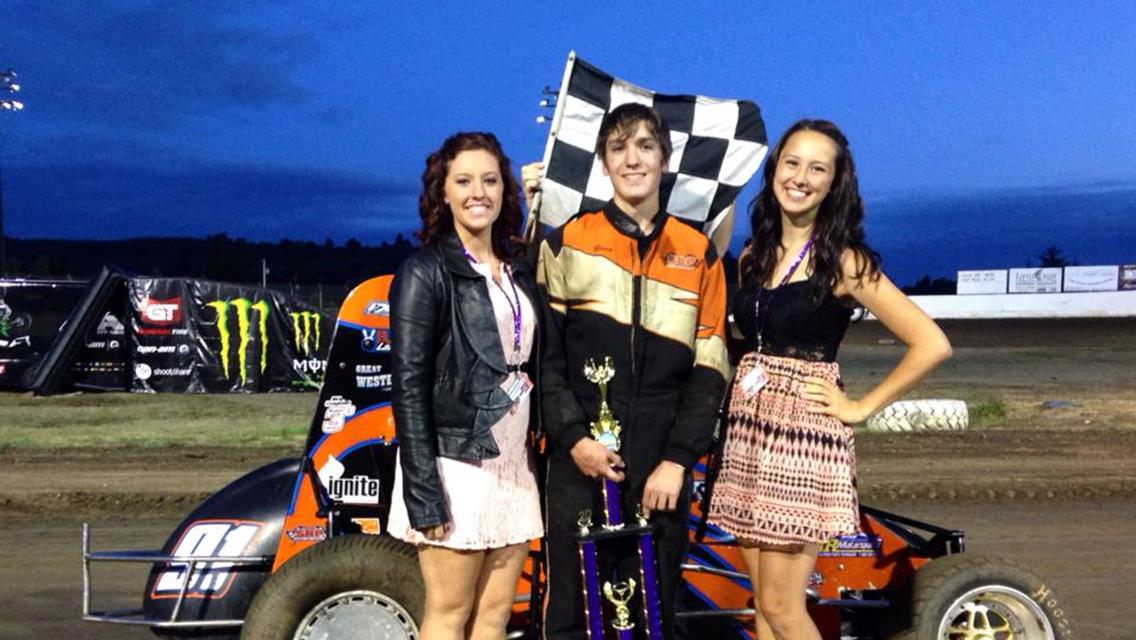 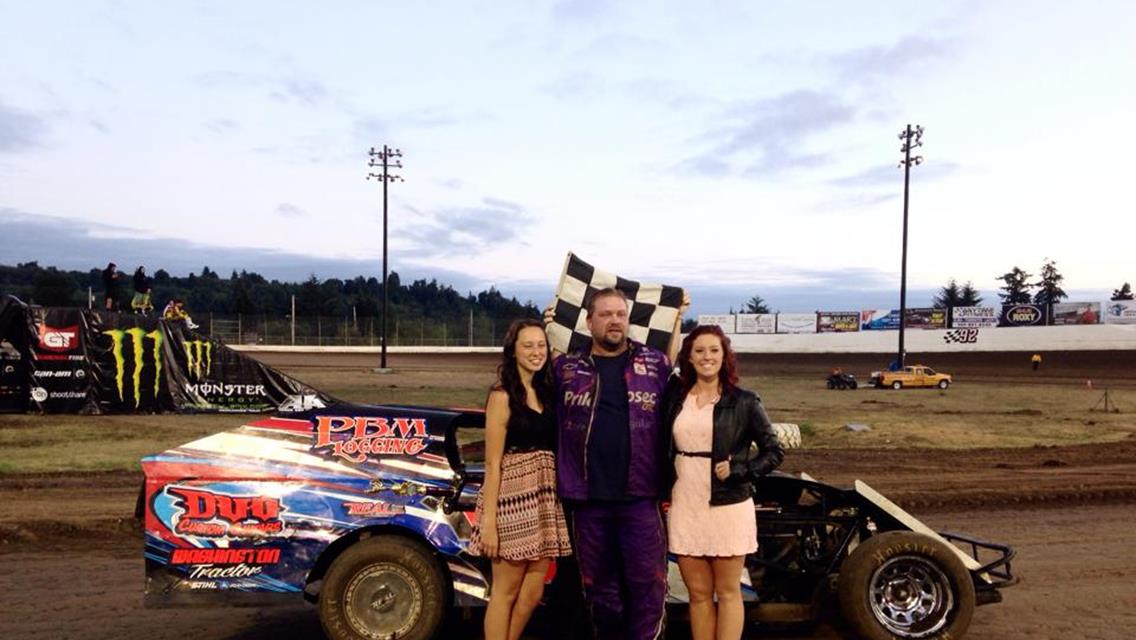