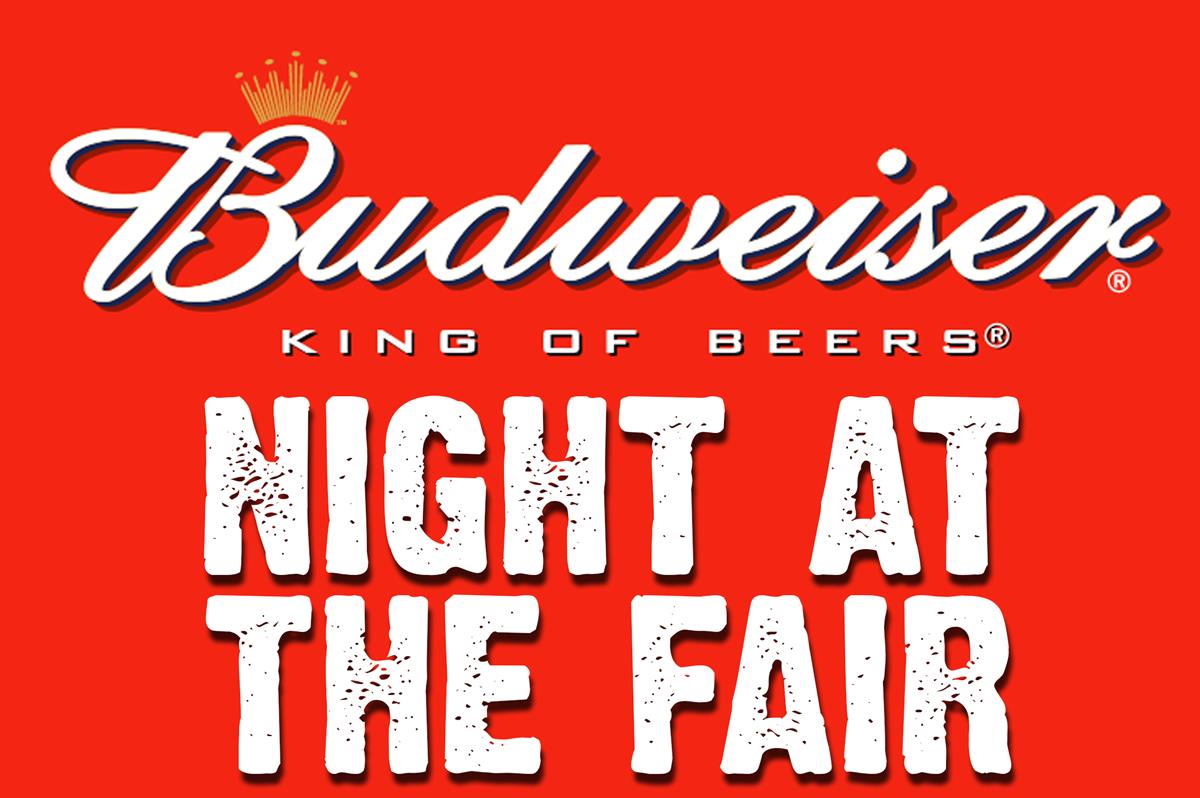 Lemmon, Carrell, and Daniel in Victory Lane at Fair Race

With temperatures in the mid to high 80's. Fans were treated to some dirt track racing on the 3/8's banked clay oval for the Budweiser Night at the Fair event at the Grays Harbor County Fair. With Wayne Lemmon, Mark Carrell and Jeff Daniel victorious.

In the Street Stock division, Shelton's Brenton Schnitzer would lead them down for the 20 lap feature. Schnitzer would take the lead out of turn two, with Spanaway's Tom Hecker, and Olympia's Eddie Blood battling for the second position. Hecker would get by Blood for second, while Jason Tole of Hoquiam would look to get by Blood, who was in the third position. Tole would move into the third spot out of turn four. Schnitzer would run the low side of the speedway, with Hecker, and Tole in chase. Hecker would get to the back bumper of Schnitzer in the opening laps, but the yellow flag would fly on lap 3 for Tacoma driver Mike Knox, and Hoquiam's Brian Izzi. Both drivers would come to a stop on the front stretch. While this incident happened, Tole would spin in turn four.

On the restart, Schnitzer would lead the field down, with Hecker right on his back bumper. The battle to watch on the speedway would be between Blood and Wayne Lemmon, who was filling in for Jack Parshall. Blood would maintain the third position from Lemmon. Hecker would be right on the back bumper of Schnitzer, looking to make his move for the lead, but the yellow would soon come out for Kelly Fugate of Spanaway, who would slow to a stop on the front stretch on lap 5. On the restart, Lemmon would once again look for the third position on Blood, getting the position out of turn four and set his sights on Schnitzer and Hecker. Lemmon would pull side by side with Hecker, who was right on the back bumper of Schnitzer, and race down the backstretch, Lemmon would slide up the track allowing Schnitzer, and Hecker to pull away. While Schnitzer and Hecker pulled away, Lemmon would have tough company of Blood and Wishkah's Don Briggs Jr, as they would all three battle for the third position. The yellow flag would fly for the third time in the feature and this time it was for Tole who would spin to a stop in turn four on lap 7.

Schnitzer would lead them down, with Hecker, Lemmon, Briggs, and Blood in chase. Lemmon would once again use the high side and look to take the lead, he would race side by side with Schnitzer down the front stretch. Schnitzer, Lemmon, Hecker, Briggs Jr, and Aberdeen's Austin Kerrigan would all battle for position. Schnitzer would retain the lead, Hecker would continue to run second, but a three wide battle between Lemmon, Kerrigan and Briggs Jr was the battle to watch. Out of turn two, Briggs, and Lemmon would split Hecker down the back stretch to take over the position, and Lemmon would also look take the lead until the red flag would come out for a 3 car incident involving Hecker, Tole, and Aberdeen's Cory Sweatman in turn four.

On the restart, Schnitzer would lead, with Lemmon looking to chase him down for the lead. Schnitzer would pull away slightly, but Lemmon would get a good run out of turn four and be right there on his back bumper. Lemmon would race side by side with Schnitzer out of turn two, and take the lead from him down the backstretch. At the end of the feature, Wayne Lemmon would take the checkered flag, Don Briggs Jr, Austin Kerrigan, Brenton Schnitzer, and Spanaway's Tim Phillips would round out the top five. Heat races went to Tom Hecker and Jason Tole, with Wayne Lemmon picking up quick time.

In the 20 lap Modified feature, Kelso's Carl Larson would start on the pole, with Redmond, Oregon driver Mark Carrell on the outside front row. As the field took the green flag Carrell would jump to the early lead, with Larson, McCleary's Josh Muller, and Shelton's Kris Asche in chase. Carrell would pull to a comfortable lead quickly, as the battle to watch was between Larson and Muller. The first yellow flag of the feature would come out for Morgan Criswell of Vancouver, as he would spin to a stop on lap 1 in turn one. Carrell would lead the field down on the restart, and pull away. Muller would look to the outside on Larson for second, but could not make the pass. The battle to watch on the speedway would be for the fourth and fifth position as Scott Miller of Shelton and Seabeck's Craig Moore would battle for position. Both drivers would race side by side into turn three and out of turn four. Miller would maintain the position slightly but Moore would work his way past Miller for the third position. Moore would look to the inside of Muller to try and take the third position and would get the position out of turn four. Carrell would continue to pull away from the field, making his lead comfortable.

Moore would look to try and take the second position from Larson, both drivers running the low side of the speedway, with Larson continuing to stay in the second position. Meanwhile Carrell would work his way through lap traffic carefully on a slick race track. The yellow would fly for the second time in the feature for Elma's Matt Arnold who would spin to a stop in turn one on lap 12. On the restart, Carrell would pull away, while Moore would try and look to the outside of Larson. Moore would then look to the bottom out of turn two and race side by side with Larson down the backstretch. Moore would move into the second position out of turn four, moving Larson back to third. The yellow would come out again quickly this time for Olympia driver Alan Muenchow who would spin on lap 14 in turn two.

The restart would see Carrell jump to the lead, with Moore moving into the second spot around Larson. Muller would look to the inside of Larson for third, but could not make the pass. Just as the field got going, the yellow would come out for Olympia driver Gene Miller who would spin to in turn two. Contact was also made to Miller by Seabeck's Dave Burns as well. This was the restart Moore was looking for to try and chase down Carrell. As the field took the green, Carrell would lead them down with a great restart. He would pull away a handful of car lengths on Moore, but the yellow would come out again this time for Criswell as he spun in turn four, kept the car going, and then stopped on the front stretch. Carrell would lead them down on the restart, with Moore, Larson, Muller, and Asche in chase. Asche would look to take over the fourth position from Muller in turn one, as Carrell would once again pull away from the field.

At the end of the feature, Mark Carrell would pick up the win, with Craig Moore, Carl Larson with his best career finish in third, Kris Asche and Josh Muller would round out the top five. Heat races went to Josh Muller and Scott Miller.

The Outlaw Tuners division started out their 15 lap feature as the final feature of the evening. As they took the green flag. Bo Jones of Portland, Oregon would take the early lead, and pull away to a comfortable lead. Ocean Shore's driver Jeff Daniel would get into the second position to try and chase down Jones for the lead. Tenino's Chad Norton would be on his back bumper as well. Jones would continue to lead as he would come up on lap traffic. He would maneuver his way through the lapped cars, and pull away from Daniel and Norton who would also have to deal with the lapped cars. Jones would once again hit more lapped traffic which slowed him down slightly, giving the advantage to Daniel and Norton to reel him in. Jones would have to hit the brakes hard to avoid Willie Wright of Aberdeen who would blow a tire down the front stretch and was pulling off the track. Jones would slide sideways to avoid Wright, allowing Daniel and Norton to get by.

Daniel would also have issues with a lapped car, almost spinning after contact, but would continue to lead. Jones would work his way back in the second spot, racing side by side with Norton and splitting a lapped car. Jones would look to track down Daniel, as he would get to the back bumper and look to the outside, but Daniel would pull away. Norton would look to make a last lap pass on Daniel out of turn four, but Daniel would go on to pick up the checkered flag. Chad Norton would settle for second, #99 car, Brittany Diggle of Wishkah, and Dale Vacknitz of Ocean Shores would round out the top five. Chad Norton would pick up the heat race.