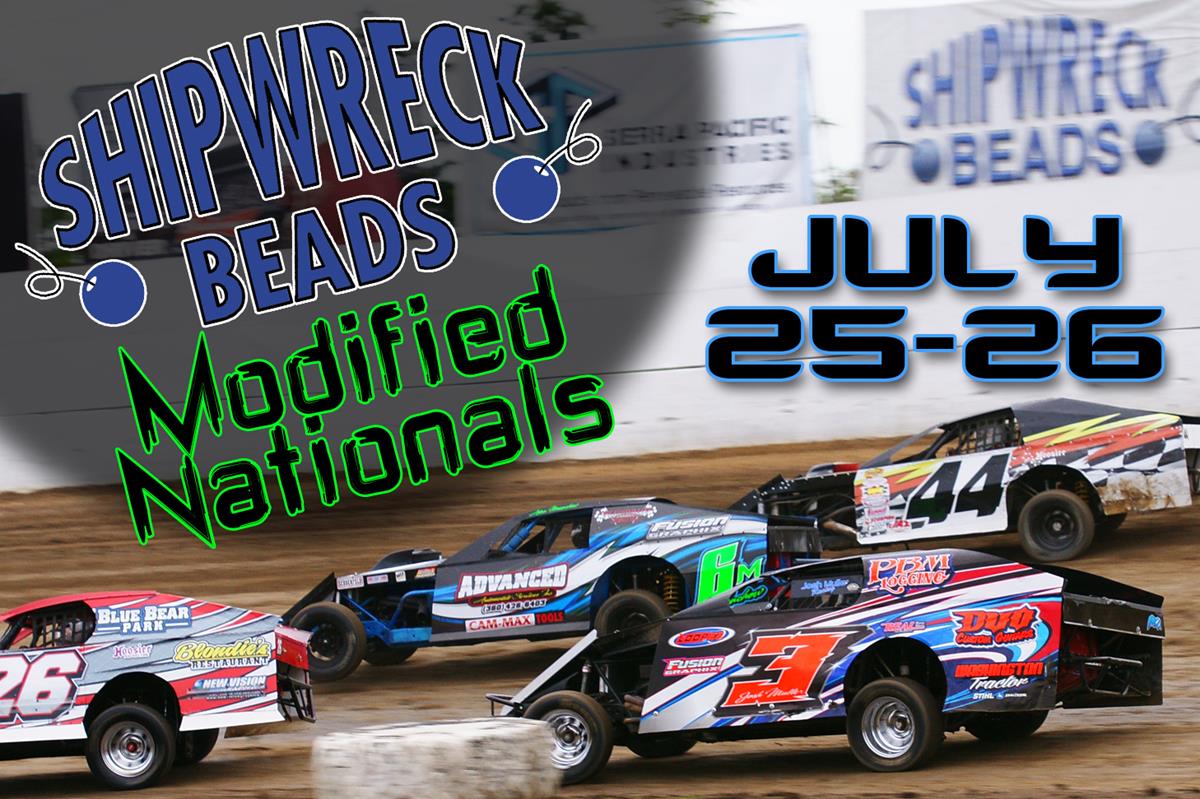 Kyle Casson of Yreka, California won the 2011 Shipwreck Beads Northwest Modified Nationals, and this year he is setting his sights on his second trophy. Kyle Casson started the night on the front row of the 25 lap feature, with Seabeck's Craig Moore. Casson took the early lead, with Campbell River, British Columbia driver, and 2010 Northwest Modified National Champion Jason Beaulieu getting past Moore for second. The field of 20 cars would scatter, with side by side racing throughout the field, as Casson continued to pull away. The first caution of the feature would happen on lap 2, for Dayton, Oregon driver Bubba Foster as he slowed to a stop in turn four. On the restart, Casson would get a great start, and this time Craig Moore would pull back into the second position, with Jason Beaulieu right on his back bumper. The early battle to watch was for the sixth and seventh position between Lawrence O'Connor of Port Hardy, British Columbia, and Medford, Oregon driver Jeremy Richey, they would race side by side for position, but the caution would come out once again on lap 4, this time for Jason Beaulieu who was running second, as he hit the uke tire in turn two, doing heavy damage to his car, he was able to limp the car back to the pits, but was unable to return, and he was ok. Casson once again got a great restart, as his car seemed to rocket off the corner to take the green flag, with Craig Moore, Chris Beaulieu of Campbell River, British Columbia right there as well, Chris Beaulieu would take over the second position from Moore going into turn two, and this lead an opportunity for Richey to make his move on Moore for third. Richey, Moore, and Albany, Oregon driver Craig Hanson tried to make it 3 wide down the front stretch, but Moore was able to hold on to the position, with Richey almost side by side with him going into turn one. Richey would take the second spot down the backstretch, with Hanson trying to make his move on Craig Moore for third. Casson would continue to pull away, with Chris Beaulieu trying to chase him down. Another caution would soon fly on lap 8 for heavy debris on the backstretch, and in turn three. On the third restart, Casson would get a sizable pull down the front stretch on the field and going into turn one, with Richey, Chris Beaulieu, O'Connor, Craig Moore, and Hanson in chase. Going into turn two, O'Connor, Hanson, and Moore would almost race 3 wide, with O'Connor successfully pulling away, and chasing down Chris Beaulieu for second. Mark Carrell of Redmond, Oregon would also join in on the battle, as he would look to the outside of Craig Moore going into turn two, and getting around Moore for position down the backstretch. Casson would pull to almost a half a straightaway lead on Richey, as the battle for third between Hanson and Chris Beaulieu was one of the many races to watch on track, throughout the field there was side by side, three wide racing for position, making it very exciting for the fans. Carrell would join in the battle with Beaulieu and Hanson, making it a three car battle for third, fourth and fifth. Carrell would work his way around Beaulieu for third, and would close in fast on Richey. Carrell would get close into turn one, and tried to make a run on Richey, but couldn't do it. Out of turn two Carrell would try again, and would show Richey a bumper going down the backstretch, setting up for a slide job in turn three and four to take the second position. Richey would look under Carrell out of four and race side by side with him down the front stretch, taking the second position back out of turn two. Carrell would attempt another slidejob in turn three and four once again, this time making contact with Richey, and causing him to slide up the track and out of the groove losing positions. This allowed Chris Beaulieu and Craig Hanson to take over the third and fourth position. At the end of the 25 lap feature, Kyle Casson would pick up $1000, Mark Carrell finished second, Craig Hanson, Chris Beaulieu, and Craig Moore would round out the top five. Heat Race winners were Mark Carrell, Lawrence O'Connor, Josh Muller of McCleary, and Jeremy Richey. Winning the Scramble was Kyle Casson. C-Feature winner was Vancouver driver Jeremy Brookshire. Austin Kerrigan of Aberdeen picked up the B-Feature, and Jason Beaulieu would pick up the $500 in the Champion's Challenge. Fast time would go to Kyle Casson.

The Pacific Hard Top Racing Association Dwarf Cars would make their second appearance of three this year at Grays Harbor Raceway for a double header as well. Cars from Washington, Oregon, and British Columbia would make the tow to the 3/8's mile banked clay oval. Last time the Dwarf Cars made an appearance to Grays Harbor Raceway, Gaston, Oregon driver Corey Estaban picked up the win. The 25 lap feature would have John Chrisman of Albany, Oregon on the front row with Eagle Point Oregon's Fred Hay. Chrisman would take the early lead, with a pack of 24 cars chasing him down. Mason Luleman of Grants Pass, Oregon would look to the inside of Chrisman in turn four to try and take the lead, but Chrisman held on to the lead momentarily. The first caution would come out for Corey Estaban, as would slow to a stop in turn four. As the field would setup for a complete restart, Luleman would take the lead from Chrisman, the second yellow would come out on lap one, for Hay, as he would make contact with Medford, Oregon driver Josh King in turn four and spin to a stop. On the restart, Chrisman would get a slight advantage on Luleman going down the front stretch to take the green flag, with Luleman right next to him going into turn one. Both drivers would race side by side, down the backstretch and into turn three, and race side by side for a handful of laps, until Luleman would take the lead from Chrisman. On lap 4, the caution would come out once again, for a multiple car accident in turn four. On the restart, Luleman would get a great start, but the battle for second position would start to heat up between Chrisman and Hillsboro, Oregon driver Ronnie Gilmore Jr. Gilmore Jr would pull into the second position, getting around Chrisman, with Molalla, Oregon driver Henry Corbin III, as well as Eagle Point, Oregon's Brock Peters would join on the mix, getting around Gilmore Jr and Corbin for position, as he would set his sights on Luleman. With action all over the track, Luleman would pull away slightly on the field, but the caution would soon come out for Chrisman, who would spin to a stop in turn four on lap 6. On the restart, Luleman would have tough company as Gilmore Jr, Corbin III, and Peters would be right on his back bumper, looking to take the lead at any time. Gilmore and Peters would race side by side, with Corbin III making it a three car battle for the second position. Just as the action was getting very exciting for the fans, the yellow would soon come out, for contact between Medford, Oregon's Reggie Ayres, and Happy Valley, Oregon driver Leo Ward, Ayres would spin to a stop on the backstretch, and collect Ward. On the restart, Luleman wouldn't get the start he wanted, as Gilmore Jr would be side by side with him down the front stretch, Luleman would pull away down the backstretch, and continue to lead. Peters and Gilmore Jr would continue to battle for second, and Peters would work his way into the second position, and start to chase down Luleman. Peters would get side by side with Luleman out of turn four, racing down into turn one, and taking the lead out of turn two. The Dwarf Car feature was plague with multiple cautions, and so the race was cut back to 20 laps, instead of the normal 25. On the final restart on lap 17 after a caution, Luleman would take the lead, with Gilmore, Corbin III, and Peters chasing him down, Corbin III would move around Gilmore Jr for second out of turn four and set his sights on Luleman. Every lap, Corbin would inch closer and closer on Luleman. As Luleman and Corbin III would take the white flag, both drivers were side by side, going into turn one, Corbin would pull ahead slightly on Luleman, they both would race side by side down the backstretch, and into turn three and four, where they continued to be side by side. They would come off of four, with Corbin III pulling ahead slightly to pick up the feature event. Mason Luleman would finish second, Ronnie Gilmore Jr, Brock Peters, and all the way from the C and B feature, James Brinster of St. Helens, Oregon would round out the top five. Heat race winners were Corey Estaban, Ronnie Gilmore Jr, Henry Corbin III, and Josh King. C and B Feature winners was Jeremy Brinster.

Racing will resume tonight for Night #2 of the 15th Annual Shipwreck Beads Northwest Modified Nationals, featuring the Pacific Hardtop Racing Association Dwarf Cars. Gates will open at 5:30 PM, and racing will begin at 7:00 PM. For more info go to www.graysharborraceway.com

NOTE: There is more that finished the B-Main, but I am unable to get them results at this time.