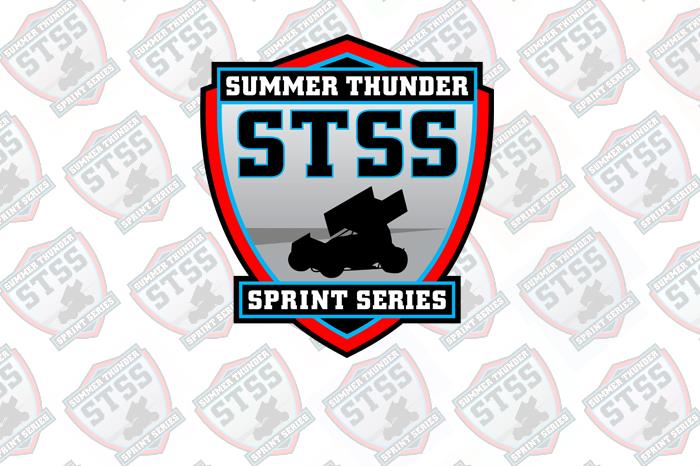 Van Dam, and Parshall Victorious On Night 1 Of Doubleheader Weekend

With temperatures pushing close to 90 degrees, the action on the racetrack was just as hot, as Round 2 of the Summer Thunder Sprint Series at Grays Harbor Raceway took to the track for the 360 Nationals, along with the Street Stock Nationals.

In the Street Stock division, Jack Parshall of Hoquiam was looking for win number four on the season after picking up the win last Saturday night during Mid-Season Championship. The 25 lap feature had Brian Izzi of Hoquiam and Tacoma driver Mike Knox on the front row. As the field took the green flag, Izzi and Knox were side by side for position. Knox took the lead down the back stretch with a whole field of cars looking to chase him down. Wishkah's Don Briggs Jr looked to make it 3 wide with Izzi and Knox for the lead going into turn two on lap 1, while contact in the back of the field was made between a pair of Aberdeen drivers Cory Sweatman and Austin Kerrigan, and Spanaway's Kelly Fugate. Both drivers regained control of their cars, while the battle for the lead in turn one started to heat up between Briggs Jr, and Knox with Hoquiam's Jason Tole moving into the third position , and it wasn't long before Tole was side by side with Briggs Jr for the lead. Both drivers raced side by side early, making a very exciting race for the crowd on hand. Tole would take the lead from Briggs Jr, but a caution would soon come out on lap 3 for Kelly Fugate who spun to a stop in turn two. On the restart, Tole led the field to the green flag. Tole would get a great restart down the front stretch and into turn one, with Briggs Jr, Knox, Izzi and Parshall in chase. The battle for 6th, 7th, and 8th between Shelton's Brenton Schnitzer, Olympia's Eddie Blood, Tim Phillips of Spanaway, and Austin Kerrigan was one of the multiple races to watch during the feature. While that battle was going on, the battle for the lead took place once again between Tole and Briggs Jr, with Knox right on their heels. A lap 4 caution would soon come out for Schnitzer, as he stopped in the middle of turn 1 and 2. On the restart, Tole would lead them down once again, this time Briggs Jr would be right on his back bumper all the way down into turn one. On lap 6, Tole moved up the track in turn four, allowing Briggs Jr, and Parshall to make their move, as Briggs Jr would take the lead going out of turn two. Tole didn't lose much as he raced side by side with Parshall. Briggs Jr and Parshall would pull away from Tole a lap later. While all of that was going on, Knox and Blood would race for the 4th and 5th position, racing side by side. Knox on the low side, and Blood on the high side. Blood would get a little sideways in turn one, allowing Knox to pull away, and Brian Izzi to make his move. Lap 10 saw Knox start to slow in turn one but keep the car going. Just as that was going on, the battle for the lead between Briggs Jr and Parshall was the race to watch, as Briggs Jr, slid up the track in turn one, allowing Parshall under him, both drivers raced side by side down the backstretch and into turn three. Parshall would take the lead out of turn four running the low side of the speedway. While Parshall continued to lead, the battle between Izzi, and Tom Hecker of Spanaway started to heat up for the 4th and 5th position. As lap traffic started to become a factor for the top 5, Parshall would manuver his car in traffic and continue to pull away from Briggs Jr. Lap 14 would see a caution for Cory Sweatman, who slowed to a stop in turn two. Under caution, third place driver Jason Tole would pull off the speedway with mechanical issues. On the restart, Parshall would lead the field down of Briggs Jr, Izzi, Austin Kerrigan, and Blood. Parshall would get a great start, as well as Briggs Jr, Parshall would quickly pull away from Briggs Jr. At the end of the 25 lap feature, Jack Parshall would pick up his fourth win of the season, Austin Kerrigan, Don Briggs Jr, Brian Izzi, and after an early race spin, Brenton Schnitzer would round out the top five. Tole and Parshall were heat race winners, and Parshall was quick time.

In the Summer Thunder Sprint Series 25 lap feature, last week's Mid-Season Championship winner Evan Margeson of Tacoma would lead the field down to the green flag. Everett's Jayme Barnes would race side by side down the front stretch and into turn one with Margeson taking the early lead. Puyallup's Trey Starks would get by Barnes for second down the backstretch. Enumclaw's Henry Van Dam, would work the top side of the speedway running in 4th, trying to chase down Margeson, Starks and Barnes. Margeson would start to pull away from the field, but the yellow would soon come out on lap 3 for Justin Youngquist of Burlington, who came to a stop down the backstretch. On the restart, Margeson would lead the field down, with Starks, Van Dam, and Stanwood driver Jared Peterson. Margeson would pull away, leaving Starks in chase, and a side by side battle between Peterson and Van Dam. Peterson on the bottom of the speedway, Van Dam running the high side, they would race for a handful of laps side by side until Van Dam would get the third position and set his sights on Starks. Van Dam would pull into the 2nd position getting by Starks going into turn 3. Van Dam would quickly close in on Margeson, as the high side of the 3/8 mile banked clay oval seemed to be the place to run. Margeson continued to lead down the backstretch, with Van Dam almost side by side with him. In turn 3, Van Dam would be side by side with Margeson, and take the lead out of turn four. Lap traffic was soon a factor, as Starks would work on Margeson for 2nd in turn four. Slight contact was made between both drivers, allowing Peterson to join in the mix. The Battle for 3rd, 4th, 5th and 6th was very exciting between Peterson, Starks, Margeson, Barnes and out of nowhere, Colton Heath of Marysville was right there in the mix. Starks would have third going into turn one, with Barnes right on his back bumper, Barnes would pull a slide job, and Starks would drive under him out of turn 2, with Heath right there as well. Starks up top, Barnes in the middle and Heath on the low side of the speedway, would see all 3 drivers come up on the lap car of Issaquah's Matt Jensen. Starks would get the advantage as Barnes would make contact with Jensen in turn 3. This allowed Heath and Jason Solwold of Burlington to make it 3 wide out of turn four, with Heath and Solwold getting around Barnes. Lap 11 would see it's first caution of the feature for Barnes and Margeson, Barnes would slow to a stop, and Margeson would spin in turn 2 after contact with Barnes. On the restart Van Dam would get the advantage, with Peterson, Starks, Heath, Solwold, and Lake Havasu, Arizona driver Logan Forler in chase, Van Dam would continue to work the high side of the speedway, with Peterson following him, the battle for 3rd between, Heath and Starks had both drivers side by side for position. The yellow flag would fly once again for Te Anau, New Zealand driver Daniel Anderson, who came to a stop on the backstretch with heavy damage to his car. On the restart, Van Dam would lead them down with Peterson right there on his back bumper. Van Dam's car would work almost perfect on the high side of the speedway, pulling away from the field. It wasn't long before Van Dam would work his way through lap traffic, allowing Peterson to catch up with him slightly. Racing throughout the field was exciting for the fans to watch, with slide jobs and side by side racing all over the place, the battle for 3rd, 4th, 5th and 6th between Solwold, Starks, Forler and Heath was the race to watch with laps winding down in the feature. The final caution of the evening would come on lap 23 for Quilcene driver JJ Hickle, he would come to a stop in turn four. The caution would setup a green, white, checkered between Van Dam, and the field, and allowing Peterson one last chance at the lead. Van Dam once again had the perfect restart, and pulled away from Peterson, the battle to watch was for 3rd between Starks and Solwold, as they would go back and forth with each other. At the end of the 25 lap feature Henry Van Dam would pick up the win, and $2000, Jared Peterson, Trey Starks, Jason Solwold, and Logan Forler would round out the top five. Heat race winners were Trey Starks, Colin Baker, Reece Goetz, and Colton Heath. Jared Peterson would pick up quick time.

Racing will continue the double header weekend on Saturday July 12th for Round 3 of the Summer Thunder Sprint Series 360 Nationals and Street Stock Nationals. Big money is on the line for both classes, as the winner of the Summer Thunder Sprint Series feature will pick up $5000, and the winner of the Street Stock Nationals will pick up $1000. Gates open at 5:30 PM, and racing starts at 7 PM.