The 360 Sprint Cars, IMCA Modifieds, Limited Sprints and Hornets were in action on the 3/8's banked clay oval, gearing up with the Prelude to the World of Outlaws. Mother nature earlier in the day brought a heavy mist but that did not stop the racing action.

Trey Starks of Puyallup led the field to the green flag in the 25 lap feature. Jacksonville, Ore driver Tanner Holmes ran in the second position with Boise, ID's Logan Forler in third. Chase Goetz of Snohomish look to make a run at Forler for the third position but couldn't make the pass. Starks ran the high side of the raceway, running right on the cushion and quickly put some distance on Forler. The caution flag flew on lap 3 for Jesse Schlotfeldt of Arlington and Roy driver Lane Taylor after some contact. Starks led Holmes, Forler, and Goetz to the green flag, Forler look to make a bid for second racing side by side with Holmes, making the pass in turn one. Quilcene's JJ Hickle worked his way into the top five, looking to track down Goetz and Holmes for a podium finish. Goetz look to work his way into the top three racing side by side with Holmes and taking over the position on lap 8. Starks wasted no time pulling away from Forler, with lap traffic looming ahead. The race to watch was the battle for second, as Goetz stalked Forler for the runner up spot. Forler slightly pulled away and held on to the position. Hickle saw tough company for the fifth position as Tyler Thompson of Harrisburg, Ore, raced side by side for a handful of laps before moving into the top five. Starks continued his lead and working his way into lap traffic, picking up the win over Forler, Goetz, Holmes, and Thompson. Heat race winners earlier in the evening were Starks, Thompson and Hickle with Starks picking up quick time.

20 IMCA Modifieds signed in for racing action. Geoff Morris of Victoria, BC led the field to the green flag with Tim Phillips of Spanaway running in the second position. Phillips would spin in turn four bringing out the caution. Morris led the field back to the green flag as Graham driver Zane Miner ran in the second position. Zach Fuller of Spanaway ran in the third as Kevin Hanson of Rochester and Aberdeen's Austin Kerrigan battled for the fourth spot. Miner looked to make a pass for the lead early on and took over the position from Morris. Tumwater's Tyson Blood worked his way through the field and into the top three, looking to track down Miner and Morris. A three car battle for fifth saw Kerrigan, Shelton's Brenton Schnitzer and Fuller put on a show for the fans before the caution flag flew for Brandon Nutter of Sedro Woolley. On the restart Miner had a very fast Blood right on his back bumper, looking low down the back stretch and taking the lead in turn three. A four car battle for second saw Miner, Kerrigan, Morris and Schnitzer fight it out for position. Miner continued to hold on, as Kerrigan and Schnitzer moved by Morris. Kerrigan saw issues mid way through the feature, sending him to the work area and to the back of the field. Schnitzer moved his way into second position bringing Seabeck's Craig Moore with him. A late race restart saw Blood, Schnitzer, Moore, and joining into the battle Scott Miller of Shelton. Moore looked to the high side, trying to work his way into second, as Schnitzer gained on Blood for the lead. Miller worked his way past Moore and into a podium position. Blood expanded his lead on Schnitzer and went on to take the checkered flag over Schnitzer, Scott Miller, Moore, and Hoquiam's Jason Tole. Heat race winners were Kerrigan, Phillips, and Moore.

Destry Miller of Olympia and Tacoma's Samuel Strange set the front row of the feature event. Just as the race went green the caution flag flew for a jumped start. On the restart Destry Miller took the early lead. Axel Oudman of Arlington, looking quick on the high side of the raceway, quickly made a pass for the lead. Miller stayed within striking distance as Strange battled for third with Shelton's Tim Martin. Both drivers running two different lines of the 3/8's banked clay oval put on a thrilling battle. Martin looked low and took the position from Strange. Oudman put some distance between himself and Miller. Strange looked to the low side for third on Martin as both drivers traded slide jobs for a handful of laps. Lap 7 saw the caution flag for debris, setting up a chance for Miller to take over the lead from Oudman. Miller, looking for a line that was faster on the high side, slowly catching Oudman. The battle for third was the race to watch once again as Creswell, Ore's Brian Boswell look to make it into the top three, battling it out with Martin. Kiera Zylstra of Monroe joined in on the battle, shuffling Martin back to fifth. Zylstra and Boswell battled it out for a podium spot, with Zylstra taking the position down the backstretch late in the feature. Boswell look to the high side out of four and both drivers raced side by side down the front stretch with Boswell taking over third. A late race restart allowed Miller to make a move for the lead. Oudman ran the low side, with Miller running higher up. Oudman had no room for mistake as Miller was right on his back bumper. A slight bobble by Miller allowed Oudman to put some slight distance and go on to pick up the win. Miller, Boswell, Justen McConnville of Dundee, Ore and Zylstra rounded out the top five. Heat race winners earlier in the night were Oudman and Destry Miller with Oak Harbor's Dustin Gehring picking up quick time.

Scott Reed of Elma and Belfair driver Max Sanford shared the front row for the 15 lap feature event. Sanford took the early lead, as a three car battle for second between Reed, Aberdeen's Cory Sweatman, and Jacob Saulsbury of Spanaway was the race to watch. Sweatman quickly took over the top spot from Sanford, as Reed, Saulsbury, and Ocean Shore's driver Dale Vacknitz moved by. Reed ran in the second position with Vacknitz moving into third. Sweatman quickly moved out front, leaving the rest of the field behind. The battle for second saw Reed and Tyler Sundstrom of Aberdeen put on a race for the fans, with Vacknitz right behind them. Sundstrom looked to the high side in turn four, racing side by side with Reed. Sundstrom moved into second with a pass out of turn two. The caution flag flew on lap 6 for Megan White of Port Orchard, collecting Jeremy Cleveland of Bucoda. Sweatman led Sundstrom, Reed, and Vacknitz to the green flag, Sweatman jumped out front as Sundstrom saw Vacknitz on his back bumper. Reed shuffled back to fourth as Saulsbury battled with Wishkah's Don Briggs Sr for fifth. Briggs Sr worked his way into the top five, looking to track down Reed and move up to fourth. A late race caution for Randy Goodman of Olympia, set up a four lap dash. Sweatman continued to look lightning quick as Sundstrom saw Briggs Sr on his back bumper. Sweatman picked up the win over Briggs Sr, Vacknitz, Saulsbury and White. Heat race winners earlier in the evening were Sweatman and Vacknitz.

Labor Day weekend racing action is not over yet. The NOS Energy Drink World of Outlaws Sprint Cars presented by the Lucky Eagle Casino and Hotel are in action tonight! The fire breathing, methanol drinking, 410 cubic inch winged warriors will battle it out on the 3/8's banked clay oval. Will David Gravel make it two in a row after his win on Saturday night at Skagit? Can Brad Sweet continue his points lead into the weekend? Will we see a Logan Schuchart pick win for the second year in a row? The racing action will be wild tonight. Also on hand will be the IMCA Modifieds. Can Tyson Blood pick up two in a row tonight? Racing action tonight to end out your Labor Day weekend. Gates will open at 4:30PM with racing around 6PM. For more information go to www.graysharborraceway.com 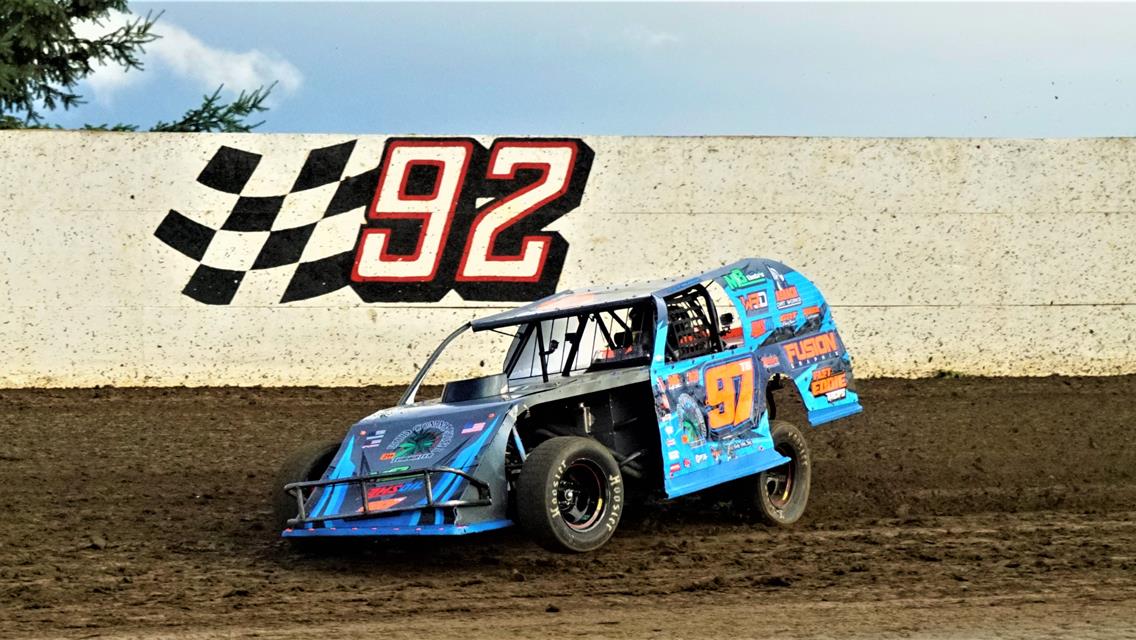 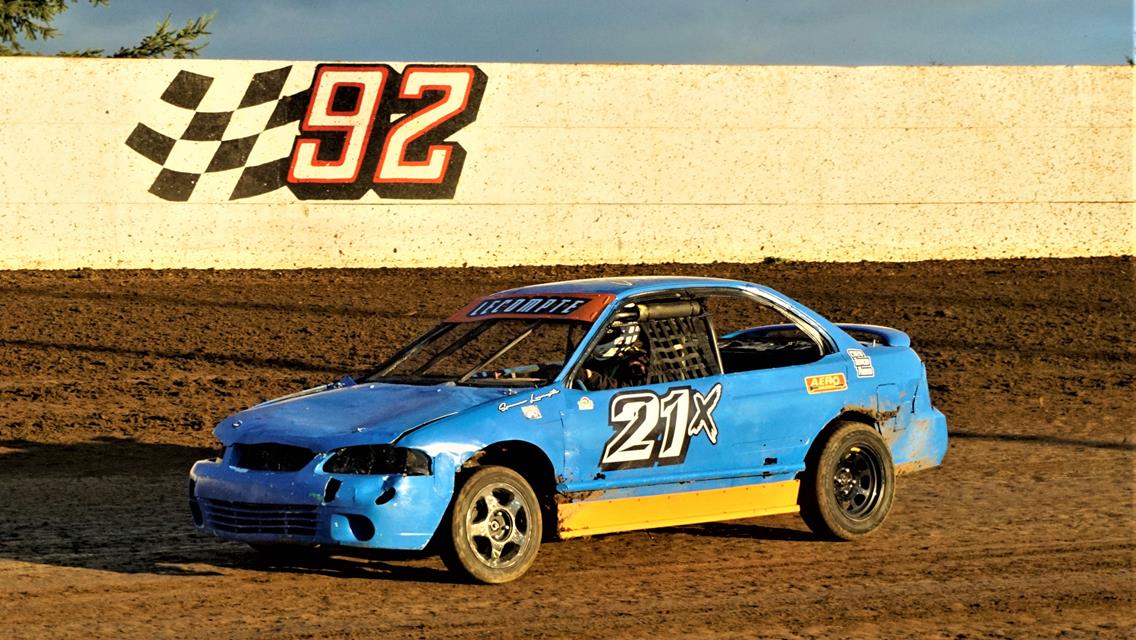